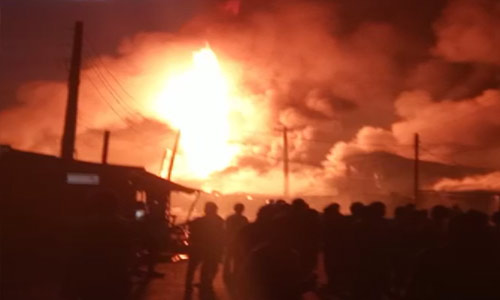 A pastor with the Chapel of His Glory Church, Asaba, Delta State, Innocent Lawrence, yesterday lost belongings worth millions of Naira to an inferno, which gutted his two-room apartment a week to his wedding.

The Guardian gathered that the building located at 23 Chukwudumebi Street beside Stephen Keshi Stadium, Asaba, Delta State went up in flames, when a plugged rechargeable lantern in his room upstairs allegedly discharged.

An eyewitness said early intervention of the state fire service prevented the fire from spreading to other apartments.

Narrating his ordeal, Pastor Lawrence said he was not at home when people called to tell him that fire had gutted his room.

He said: “I was not at home when people called me that my room was on fire. Before I could get there, fire had finished my property, and I was planning for my wedding before Christmas when this misfortune came.

Director of the state fire service, Mr. Eugene Ozewele, who confirmed the incident advised residents to be careful the way they handle electrical appliances, gas and petroleum products as the dry season approaches.

IN kano, the Kano Municipal Council Chairman, Comrade Faizu Alfindiki, has pledged to rebuild the 44 shops burnt at old Kurmi market, which has operated for 1000 years.

The Guardian learnt that traders lost properties worth millions of Naira in the inferno on Monday.

Some of the displaced traders are asking for assistance from government and private individuals.

A shop owner, Alhaji Muhammad Ibrahim, said he was devastated when he learnt from his neighbour that his shop was consumed by the inferno.

He lamented that most of the affected persons, who were petty traders and cannot afford three square meals in a day and wondered how they could survive, especially at this critical period.

But, Comrade Alfindiki has promised a special package for the affected traders.

Alfindiki, who paid a sympathy visit to the affected market located at the heart of Kano metropolis, donated N2 million to victims.

He said the donation was to alleviate their sufferings and help them restart their businesses.

The chairman, who described the incident as a disaster, thanked the Commissioner for Local Government, Alhaji Murtala Sule Garo for  identifying with the council to revive  economic activities in the market.

He prayed to Almighty Allah to prevent future occurrence of such incidents.

In his remarks, the chairman, Kurmi market Association, Alhaji Ya’u Karas, appreciated the gesture by the Municipal Council, adding that it would enable them to bounce back.

He urged members to make judicious use of the donation to kick-start their businesses.

Pray for me – Peruzzi opens up on health challenge