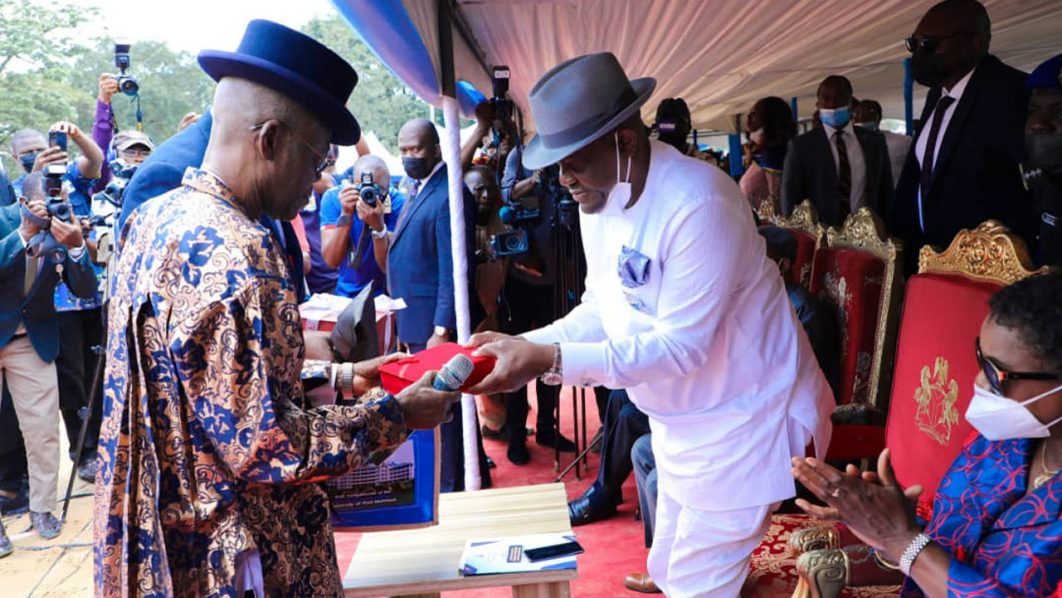 Rivers State Governor, Nyesom Wike (right) receiving a souvenir from the Chairman, Governing Council of the University of Port Harcourt, Senator Andrew Uchendu, during the foundation laying of the 9,200 capacity convocation arena of the university…yesterday.<br />

Rivers State Governor, Nyesom Wike, has said the appointment of Vice Chancellors, who are influenced by politicians, insisting that they are used as returning officers to rig elections for the ruling party.

He, however, warned Vice Chancellors and lecturers to be wary of attempts by some politicians to use them to manipulate elections, declaring that those contemplating rig elections in Rivers State would be treated as coup plotters.

Wike spoke yesterday in Port Harcourt during the foundation laying ceremony for the ultramodern convocation arena of the University of Port Harcourt by the Rivers State Government.

He said it was worrisome that Nigeria had degenerated to the point where politicians now influence who becomes vice-chancellors of federal tertiary institutions for the purpose of rigging elections.

The governor stressed that the reason there is so much tussle these days on who becomes Vice-Chancellor of Federal universities was due to political interference.

He described a situation where lecturers who are supposed to be revered in society, willfully compromise their integrity, just to become Vice-Chancellor, who will afterwards be used to manipulate elections as disheartening.

Wike warned that any Vice-Chancellor who allowed himself to be used in rigging elections in Rivers State should be prepared for the consequences, adding that as an alumnus of the University of Port Harcourt, his business was not to play politics in the university but to contribute to its development.

IN a related development, Wike, yesterday, announced the relaxation of the curfew imposed on the State from Wednesday, July 7 (today).

He, however, explained that the relaxation of the curfew followed improvement in the security situation of Rivers State and other neighbouring states.

Wike, who announced this in a state broadcast, said the state government acknowledged the negative impact of the curfew on businesses and the socio-economic wellbeing of residents of the state.

He explained that in imposing the curfew, the government’s primary concern and interest was and still remains the security of the State and no sacrifice or price can be said to too much to endure for the preservation of life and property.