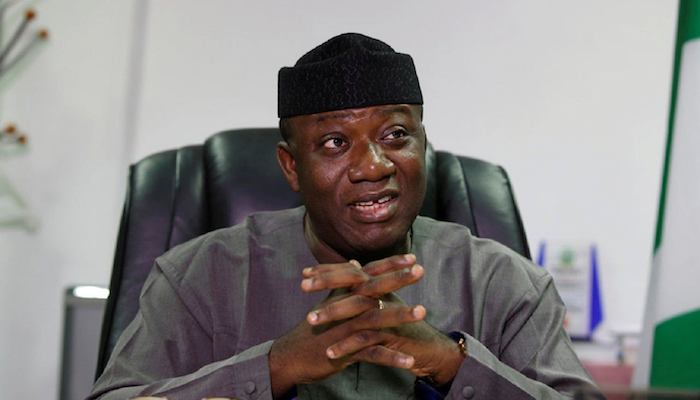 In 2014 shortly after the Independent National Electoral Commission (INEC) announced Ayodele Fayose candidate of the People’s Democratic Party (PDP) as winner of the Ekiti State, gubernatorial election, his opponent and then incumbent governor of the state, Kayode Fayemi called and congratulation him over his victory at the poll.

Fayemi’s gesture was perhaps novel in the Nigerian politicians’ contest for power, considering that over the years it had become increasingly difficult for an average Nigerian politician to accept defeat in an election without faulting the process, making claims and in some instances castigating the electoral umpire.

Interestingly, Fayemi would later succeed Fayose again in 2018 for his second term in office, after defeating Olusola Eleka, the PDP candidate who was deputy to Fayose in a keenly contested election.

Before winning the 2018 election, he had served as the Minister of Solid Minerals Development in President Muhammadu Buhari cabinet from 11 November 2015 to 30 May 2018, after which he resigned to contest for a second time as governor.

Meanwhile, in the last one week, Fayemi who is the chairman of the Nigeria’s Governors’ Forum (NGF) has been in the news over comments where he attributed the rising separatist movements in the country to frustration arising from the disenchantment of the agitators with the perceived failure of government to meet their aspirations.

He had said the ruling All Progressives Congress (APC) did not fully appreciate the severity of the problems in the country during its campaign in 2015, adding that the country must look for the best solution to its security challenges, including a multi-level policing policy.

He also called for a different approach to managing the security crisis and other national challenges beyond the secessionist campaign.

Speaking on the growing disappointment of Nigerians in the APC and President Buhari to keep campaign promises, the governor stated that the gap between the electoral promises and the APC’s achievements was due to exaggerated expectations caused by the campaign promises.

According to him, “Frankly, when you have stress and laxity in society, you are bound to find a whole range of responses. Some rational, some irrational, some that speak to the fears of the people, some opportunistic and hare-brained. There’s no question that some of the reactions we have seen will fall into all of those categories.

“The people, who are saying those things (secession), are saying so out of frustration. But I don’t think that that’s the solution to the Nigerian predicament. I have been on record several times that on matters of security and national development, we need to find ways of managing our diversity and differences in this country.”

However, perhaps, the comment that has generated more public reaction, and pitches him against his political opponent is, his view that presidential aspirants who were above 60 years of age would not be allowed to rule the country in 2023.

He had called on the youth to launch themselves into the Nigerian political terrain in the 2023 general elections and dictate who becomes president and governors of the 36 states.

The governor spoke in Abuja at the National Youth Summit and Conference organised by the Nigerian Youth Congress (NYC), urging the youth to take charge in 2023, saying that aside from political offices, their energy and wisdom would also be useful in other aspects of the country’s economy.

“We have 2022 and 2023 elections around the corner, and in the new dispensations that are coming up, what is our role? Are we going to be blocking the Toll gates?

“One thing I can tell you is that we the Nigerian youths are not going to allow anyone above the age of 60 years to run for president. Nigerians have suffered enough. Enough is enough. It is not by saying, we have to go into action and we have to mobilise.’’

An immediate reaction came few hours later from a loyalist of the All progressives Congress (APC) national leader, Bola Ahmed Tinubu, in the person of the former Senator representing Oyo South senatorial district, Rilwan Adesoji Akanbi, who is warned anyone feeling threatened by the person of Asiwaju Bola Ahmed Tinubu to desist from whipping sentiments about age.

Akanbi made the disclosure shortly before the inauguration of Akwa Ibom Stakeholders for Asiwaju Tinubu (AKISAT) 2023, a volunteer-oriented political support group on Friday in Uyo, Akwa Ibom State capital.

He suggested that the youth population should rather root for a presidential aspirant with evidence of quality service delivery, noting that Tinubu has demonstrated over the years that he is a leader who spots and utilises human talents to achieve results.

“It’s not a matter of being young; it’s a matter of marketing a product. We are talking about empirical evidence, what he or she has done before I’m certain,” he said.

Fayemi’s position has also received knocks from the former Presidential spokesperson, Doyin Okupe, who described it as dictatorial. Okupe, who recently declared his intention to run for president in 2023, said such an idea was unconstitutional.

“The statement credited to Governor Fayemi that nobody above the age of 60yrs will be allowed to rule Nigeria in 2023, is dictatorial, unconstitutional and a gross violation of Fundamental Human Rights of Nigerian citizens in that age bracket.

“It is however achievable if; one; “There is a constitutional amendment to that effect; two; If a majority of the Nigerian electorates act in tandem with the idea through their votes in the Presidential elections.

“I will not waste my time or that of my readers with the merits and demerits of this misguided age discrimination and employment of illegal tactics to achieve it, for now,” he said in a series of tweets on Friday.

The Ekiti Governor, who was born on 9 February 1965, is a native of Isan-Ekiti in Oye Local Government area.

He attended Christ’s school Ado Ekiti from 1957 to 1980. He later went on to receive a degree in history, politics and international relations from the University of Lagos and Obafemi Awolowo University, Ife.

From 1989 to 1992, he underwent Doctorate program in war studies from King’s College London, specializing in civil-military relations.

In December 2020, Fayemi claimed he was bidding his time but knew when to pause negotiate with the government and that made him successful. He said this at a virtual symposium held by the Harvard Kenny Alumni Association of Nigeria with the theme: The Africa Policy Dialogue Series: Harnessing Africa’s Demographic Dividend for Peace, Security and Productivity through Investments in Youth.

He admitted that the youth, who were actively participating in the #EndSARS protest at the time, had a right to demand for good governance and an end to police brutality, saying the government owes that to them.

Interestingly, within the last few years, unlike his predecessor, Fayemi has been outspoken supporting the need to restructure the country and dissolve power from the central to the regions.

In 2019, while delivering a paper at the United States Institute of Peace (USIP), Washington DC, United States, argued for the restructuring of Nigeria, saying it is an unavoidable step for the creation and sustenance of participatory, consensus-oriented, accountable, responsive and equitable national governance based on respect for the rule of law.

He had advised Nigerian populace to show more interest in governance and hold their leaders accountable; stressing that showing indifference might be dangerous for democracy.

“The current phase of the struggle is therefore not just about maintaining the sanctity of the ballot but also holding those elected accountable and stimulating civic engagement in the public realm, in a way that democratises ownership and improves the quality of life of our people.

“We must banish the idea that governance is something performed by a team of gifted performers or strong men, while the rest of the citizens are spectators or complainers,” he added.

“Democratic institutions cannot be strengthened in a climate of apathy and clinical disengagement,” he had also said.