Father Mbaka says DSS not involved in his ‘disappearance’ 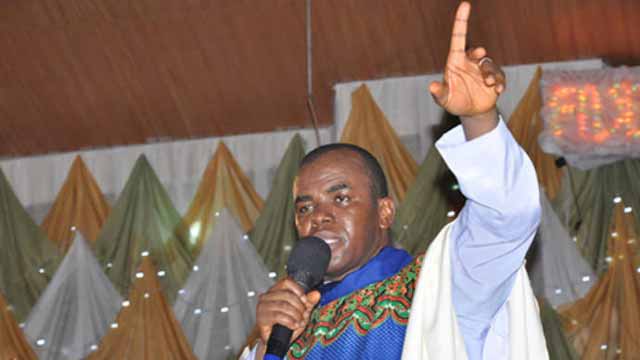 Supporters of the fiery Catholic preacher went on a rampage in Enugu on Wednesday in protest, thinking he may have been arrested by the Department for State Services for his recent criticisms of President Muhammadu Buhari.

But Mbaka said he was kept incommunicado by his bishop and ordered to not make public statements for a month.

“I thank God you have never attacked the wrong people,” Vanguard quoted the priest as saying on Wednesday.

“The DSS was not involved in what happened. But the Bishop gave an order that I should not come here from today. I should leave Adoration House, parish house, that there silent no programme here for 30 days and I should stay silent for 30 days.”

Mbaka was a staunch supporter of Buhari before the 2015 general election and publicly endorsed the then-candidate Buhari.

He also supported the Nigerian leader for a second term.

But his criticism of the president late last month marked a change in their once chummy relationship when Mbaka called Buhari a failure, blaming him for the mounting security challenges in the country.

He asked the National Assembly to impeach Buhari if he refuses to resign.

“How can people be dying and the chief security officer of the country would be sitting down without making any comment. Gunmen attacking people everywhere,” Mbaka told his congregation on April 29. “Buhari should have resigned honourably following his failure as a leader.”

A spokesman to the Nigerian president said the preacher’s criticism was misplaced and that it was deliberately spiteful.

Garba Shehu said Mbaka lashed out at Buhari after the president refused to award contracts to the preacher.

But in his defence, the preacher admitted he led three security contractors to Buhari after they told him they had plans that could help Nigeria overcome its security challenges.

If bandits kill you, you are going straight to ‘Paradise’ – Islamic cleric says

We paid N.8m to someone Gumi introduced us to – Parent of kidnapped Kaduna student

We paid N.8m to someone Gumi introduced us to – Parent of kidnapped Kaduna student