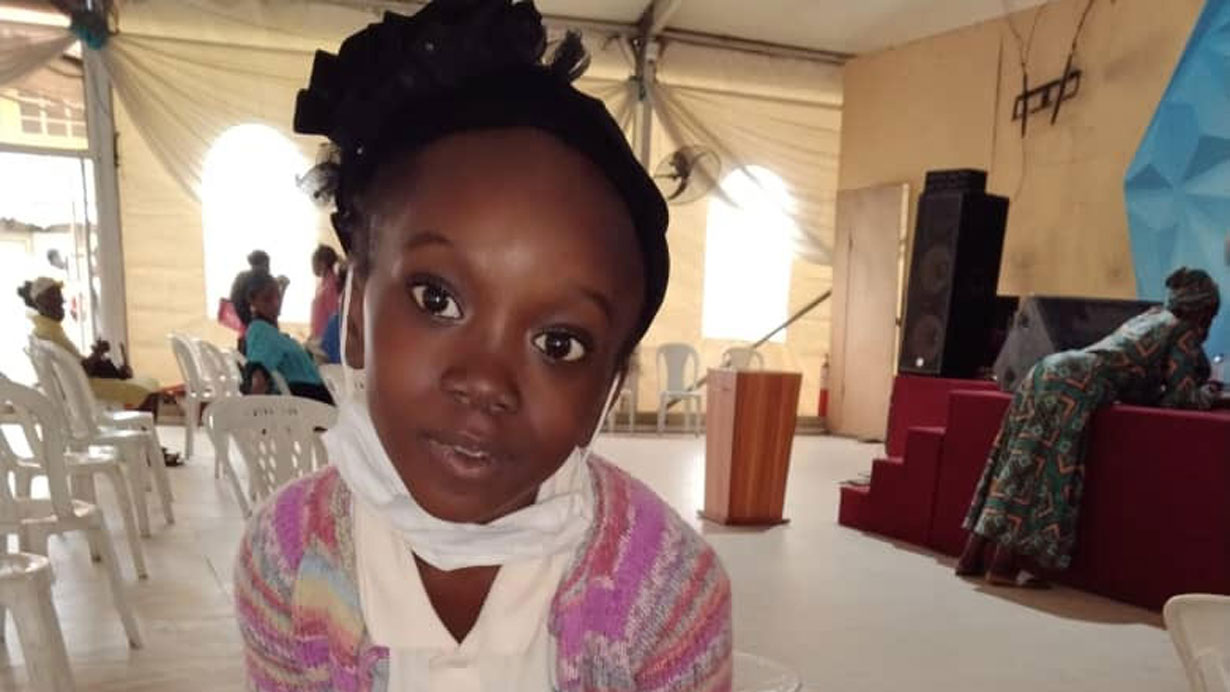 Mrs. Bamidele Aro Opeoluwa, the mother of Mofarayola Bamidele Aro, a 7-year-old girl who has been diagnosed of a massive tumor in the head, has called on well-meaning Nigerians for urgent financial assistance for the daughter to live.

Mrs. Aro, who hails from Ondo State, and the husband from Kogi State, are also appealing to their state governors, Rotimi Akeredolu and Yahaya Bello to come to the aid of the family.

The mother narrated the ordeal of her daughter: “This problem started in 2020 at the beginning of COVID-19 pandemic in Nigeria. Suddenly, we discovered that Farayola was falling sick regularly, vomiting and complaining of headache. We didn’t take it for granted, we took her to a private hospital for treatment, thinking it was just typhoid and malaria fever. At the end of the day, this year, we took her to the General Hospital when there was no improvement and the consultant did a brain scan for her. That was when they told us there is a tumor on her head.

“Since then, she couldn’t walk again without falling down. She was staggering. She lives with severe headache, vomiting intermittently. The tumor is so massive that it was compressing the vital organs in the brain, which made it impossible for her to walk perfectly. It has also affected the hands, she cannot use them to hold something again without falling off.”

According to the mother, the brilliant and vibrant Farayola, a Basic One pupil, could no longer attend school because she urinates and defecates uncontrollably on her body with excruciating pains.

“Her mouth is let loose and saliva comes out freely. She complains of eye pain, she cannot see very well again. This is why I’m seeking for the help of Nigerians and the general public. I cannot do it alone because the money involved is not what we can afford. We are pleading with the people of Nigeria to help us so that this girl can live her normal life the way she had been living before. She is just seven years old. She is a very vibrant girl and I don’t want to lose her. I would be very grateful to Nigerians if I can be helped.

“I’m appealing to the governors of Ondo State and Kogi State to please help me with whatever that they have in their capacity. I don’t want my child to die,” she pleaded.

The CT Brain (Plain and Contrast) result signed by the consultant radiologist, Dr. Asif Thamboll, partly read thus: “There is lobulated hypo density of 52x51mm seen in the midline posterior to fourth ventricle involving vermis and extending on both sides of cerebellar hemisphere. There is mass effect causing compression of pons, midbrain and fourth ventricle with resultant moderate hydrocephalus and minimal periventricular seepage…”

Farayola will undergo two surgeries. “They said they would, first of all, remove the massive tumor that is obstructing the passage of water from the brain. The second surgery would be done so that the water would come out for her to live her normal life again,” the mother said.

Wellness: A day at the Dew centre in Lagos

Wellness: A day at the Dew centre in Lagos