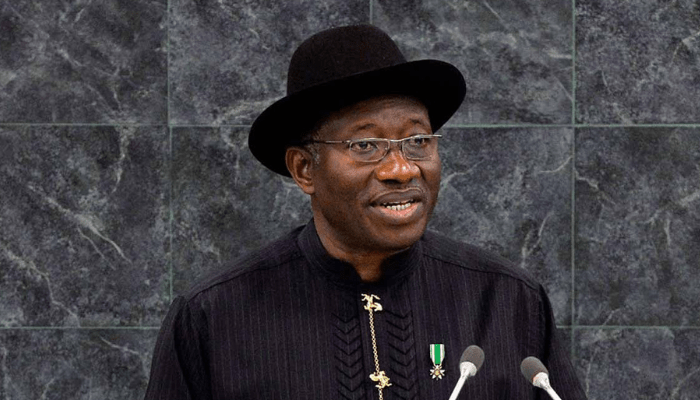 Former President Goodluck Jonathan has urged politicians across Nigeria to close ranks after elections and stop playing politics of bitterness.

Speaking at a victory thanksgiving/anniversary service at the King of Glory Chapel, Government House, Yenagoa on Saturday to mark Governor Douye Diri’s one year in office, Jonathan advised politicians to come together to support whoever emerged winner.

He also called on politicians not to see elections as coups and continue to live as enemies throughout life, stressing the need for them to realise that the democratic process is recognised by law.

“In Nigeria, what we know, especially at the national level, is change of governmnent through coups during the military era. And at the end of that coup, whether the coup succeeded or not both parties lived as enemies. Sometimes they stayed as enemies till they died.

“But, our democratic process is recognised by law. So we, the modern day politicians, should not begin to practice democracy and contestation to power as if we are organising coup. At the end of the political process, we expect that both parties should come together and the winner carries everybody along,” Jonathan said.

He admonished those who contested election to realise that it was a political process known by law and whoever won was given that position by God.

“I want to thank Governor Diri for opening his hands and welcoming every citizen of Bayelsa State irrespective of political divide. Immediately you win an election you become the governor of everybody. And you can’t be governor of only the party you belong.

“There is nothing stopping a governor or presdent from picking somebody from another party and making him a commissioner or minister or giving him any other office in governmnent because at the end of the process whoever emerges serves everybody,” the former president said.

Also speaking, Bayelsa State Governor Douye Diri appreciated God who made it possible for him to be sworn in as the governor even when he least expected it.

Diri won the governorship election through a Supreme Court judgment on February 13, 2020 and he ascribed it to the prayers of men of God and the people of the state.

February 14 would mark Governor Diri’s one year in office having been sworn in on Saturday, February 14, 2020.

This year, however, he has started off well as the governor has resumed several inherited projects that were stalled, including the Yenagoa/Oporoma Road, Sagbama/Ekeremor Road, Outer Ring Road and second phase of the Gloryland Drive, among others.

He has also set about rehabilitation and repairs of 50 internal roads in Yenagoa amidst plans to build science technical schools across the eight local government areas.