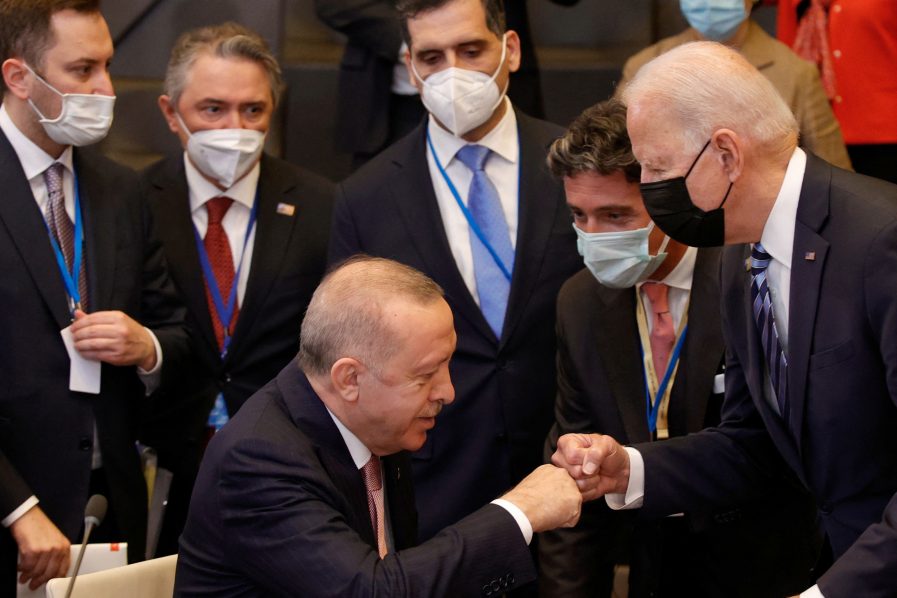 Turkey’s President Recep Tayyip Erdogan (C) fist bumps with U.S. President Joe Biden (R) as he stands up to greet him during a plenary session at a NATO summit in Brussels, Monday, June 14, 2021. U.S. – The allies will agree a statement stressing common ground on securing their withdrawal from Afghanistan, joint responses to cyber attacks and relations with a rising China. (Photo by Olivier Matthys / POOL / AFP) / CAPTION CLARIFICATION

Turkish President Recep Tayyip Erdogan said on Monday he held a “fruitful and sincere” meeting with his US counterpart Joe Biden on the sidelines of the NATO summit in Brussels.

“We believe there is no problem that cannot be resolved in Turkey-US relations,” Erdogan added after holding his first meeting with Biden since his election.

Relations between the two NATO allies nosedived after Turkey’s purchase of a Russian S-400 missile defence system that the US believes can be used to spy on Western defences.

It also expelled Turkey from the F-35 programme under which Western allies produce the next-generation fighter jet’s parts and secure its early purchasing rights.

“I raised the issue of F-35s,” Erdogan said in a signal that he wanted Turkey admitted back into the programme. 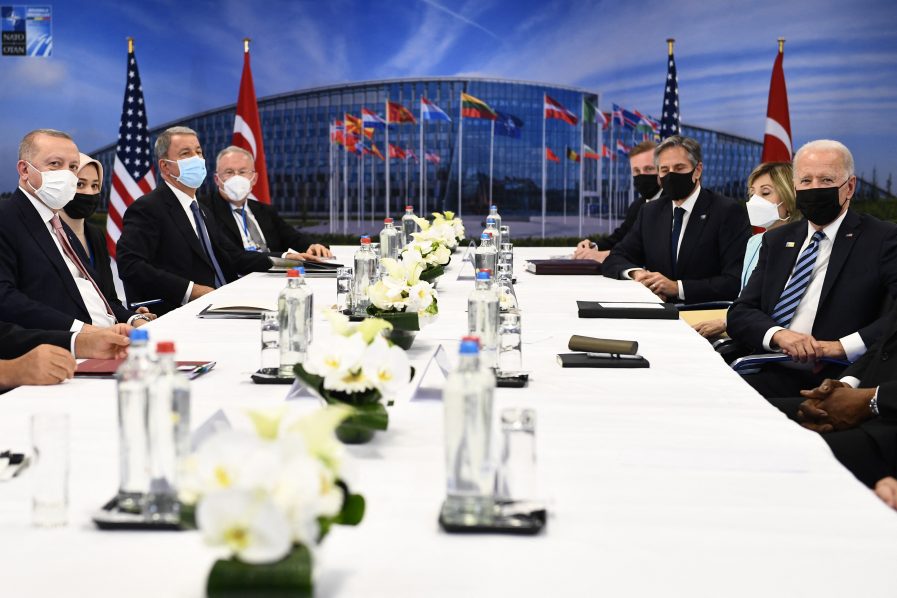 Turkey’s President Recep Tayyip Erdogan (L) and US President Joe Biden (R) attend a bilateral meeting on the sidelines of the NATO summit at the North Atlantic Treaty Organization (NATO) headquarters in Brussels on June 14, 2021. (Photo by Brendan Smialowski / AFP)

“I told him what joint steps we can take on the defence industry.”

– Macron, Mitsotakis meetings –
Biden has also made a point of highlighting Turkey’s deteriorating record on human rights — an issue that was largely overlooked by his predecessor Donald Trump.

He took three full months after his swearing-in ceremony before placing his first call to Erdogan.

That was to inform him that Washington was recognising the Armenian genocide by the Ottoman Empire during World War I.

Erdogan raised the possibility ahead of the meeting that the two sides could cooperate on Turkey’s possible role securing the international airport in Kabul after the US completes its troop withdrawal from Afghanistan.

Turkish officials had said they would want financial assistance in exchange for a military presence in Kabul.

Erdogan announced no firm deal on the airport but said Turkish forces might work jointly in Afghanistan with those of Pakistan and NATO member Hungary.

“If Turkey is not asked to leave Afghanistan, the US support on the diplomatic, logistical and financial front is very important,” he said.

Erdogan also held separate meetings with French President Emmanuel Macron and Greek Prime Minister Kyriakos Mitsotakis — two leaders with whom he has sparred repeatedly in the past year.

Turkey and Greece have been feuding over migrants and Ankara’s push into disputed eastern Mediterranean waters near the divided island of Cyprus in search of natural gas reserves.

Erdogan said he told Mitsotakis that the two neighbours should resolve their disputes directly and without the involvement of “third parties”.

Greece has been backed in its claims by France and the European Union. Turkey’s candidacy to join the bloc has been effectively frozen for much of the past decade.

“If there’s a problematic situation, you can easily call me from the direct line, and I can do the same,” Erdogan said in comments addressed to the Greek premier.