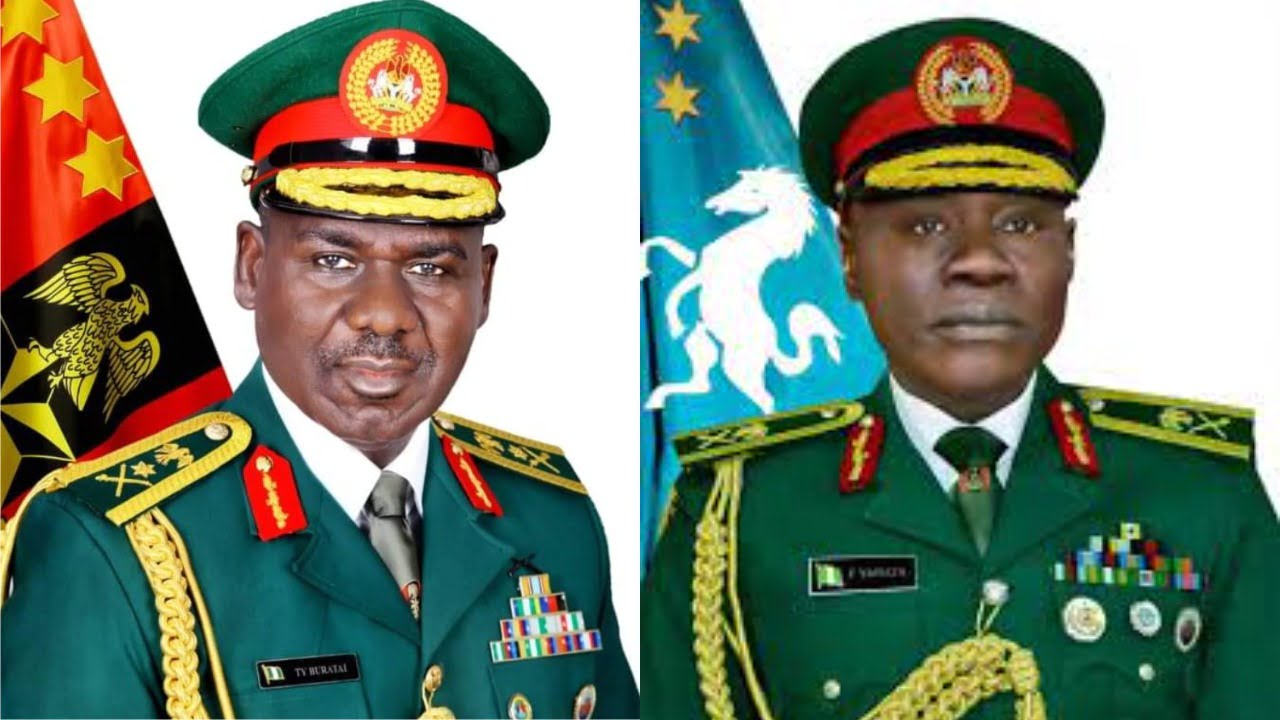 If you are old enough to read and decipher the underlying messages encompassed in news captured by mainstream media especially in Nigeria, you must be abreast of the fact that there are too many fragmentation in politics as are played by Nigerian Politicians.

Politicians of different genres hardly come into a consensus on issues of strategic national appointments.

Funmi Branco: Ogun politics, Amosun and the abuse of power

Most times both the ruling political party and the leading opposition party are in diametrically opposed positions on the matter of who has or has not being appointed into specific national offices of significance.

There’s now a positive exception with the appointment of the new Chief of Army staff Lieutenant General Faruk Yahaya.

His appointment has attracted rare applause from a significant leader of the leading Opposition party and the praises for the President who is the appointing authority came from an unexpected quarters- Peoples Democratic Party governor.

Aminu Tambuwal is the governor of Sokoto under the platform of the People’s Democratic Party and he is the Chairman of the PDP Governors’ forum in Nigeria.

As stated, governor Aminu Tambuwal of Sokoto State commended President Muhammadu Buhari for appointing sons and daughters of the state at the Federal level.

The governor noted that the appointments of the Controller General Nigeria Correctional Service and the Chief of Army Staff by the Federal government have really attracted recognition of the state at the centre.

“We thank President Muhammadu Buhari for the appointment of our own. Importantly, I commend all of you who have been elevated to various positions particular for your service to the country.

“Sokoto state by this set of appointments has really attracted more recognition of the government at centre.

“Therefore, I congratulate all of you on behalf of government and people of Sokoto State for the upliftment and appeal on you to discharge the responsibility shouldered with passion and dedication,” he said.

There is also something that has started happening in the Nigerian Army that is reminiscent of the Soft spots of the military which brings out the human angle of the usually tough looking and thoroughly disciplined Nigeria Army.

This virtue and passion is the idea of constantly visiting wounded soldiers and making provisions for their wellbeing and welfare.

This good pragmatic modus operandi was emblematic and indeed characterized the leadership style of the immediate past Chief of Army staff Lieutenant General Tukur Yusuf Buratai. Buratai was always seen dining with combatants on the war fronts of the war on terror in the North East of Nigeria for all of the five and half years that he was the Army Chief. He practically led from the front lines.

For the five years or so that Lieutenant General Tukur Yusuf Buratai the Borno State born military tactician held sway as the Army Chief of Staff, he was a regular visitor to military hospitals to look after soldiers wounded in the war on terror. He erected many housing assets for the benefits of families of his operatives who are fighting in the battlefields.

One of his successors and indeed the present Army Chief of Staff Lieutenant General Faruk Yahaya has continued to carry through this virtuous attribute that was in display during the period that Lieutenant General Tukur Yusuf Buratai was in office.

This exemplary lifestyle of visiting the wounded soldiers is also a legal tradition that is embedded in the Geneva Conventions on war and warfare.

I will very shortly give citations from some legal scholars who took time to espouse on the essence of showing solidarity with wounded and sick soldiers.

This goes to show that the Army Chief who follows through with the step is complying with local, municipal and international humanitarian principles and laws.

These experts say that the sight of thousands of wounded soldiers on the battlefield at Solferino moved Henry Dunant to initiate the process that resulted in the Geneva Conventions.

Conventions I and II are entirely given over to safeguarding not only the wounded, sick and shipwrecked, but also the support services (personnel and equipment) needed to come to their aid.

Once wounded, sick or shipwrecked and provided that they refrain from any act of hostility, even former combatants become “protected persons”.

They may not be attacked and must be respected and cared for, often by removing them from the combat zone for impartial care. Protocol I extends this protection to wounded, sick and shipwrecked civilians refraining from any acts of hostility.

The necessary care can often only be given, however, if the people who provide it are not attacked and allowed to fulfill their task. On the battlefield this will only work if they constitute a separate category -medical personnel-, never participating in hostilities and caring for all the wounded without discrimination, and if they are identifiable by an emblem.

The idea of Solferino entails respect, protection and care for the wounded, sick and shipwrecked, without any adverse distinction.

Wounded and sick are persons who are, because of trauma, disease or other physical or mental disorder or disability, in need of medical assistance, they submitted.

This covers equally new-born babies, maternity cases and other persons in immediate need of medical assistance.Shipwrecked are persons who are in peril in waters as a result of misfortune affecting them or their vessel.

The IHL definition is however more restrictive than common parlance, because persons who continue despite their condition to commit acts of hostility are excluded from the definition and specific protection, the International legal scholars affirmed.

The Chief of Army Staff (COAS) Lieutenant General Faruk Yahaya began his job as the boss of the Army with a visit to the wounded soldiers when he paid his maiden visit to the Theatre Headquarters Joint Task Force North East Operation Hadin Kai (OPHK) from 16-19 June to assess the operational and welfare state of the troops.

During his visit to the hospitals, he assured troops of adequate medicare and support in the ongoing counter-insurgency operations.

The COAS gave the assurances when he visited the 7 Division Hospital and University of Maiduguri Teaching Hospital (UMTH) to commiserate with the sick and wounded in action troops recuperating at the medical facilities.

The COAS also prayed for their speedy recovery.

While at the hospital, the COAS took time to interact with the soldiers and assured them of proper medical care and welfare, adding that their medical care is of utmost importance to him .

He averred that the nation is indeed proud of their selfless service and sacrifices towards restoring peace to the North East region.

Similarly, the COAS visited the Mechanical Repair Group to inspect the ongoing repairs and refurbishment of vehicles at the workshop through the use of local resources.

He commended the resilience and ingenuity of the engineers and technicians in fixing most of the vehicles that were hitherto classified as ‘beyond local repairs’.

Earlier, the new Theatre Commander OPHK, Major General Christopher Musa briefed the COAS on the operational situation in the Theatre.

A statement by Col Ado Isa, Deputy Director Army Public Relations quoted the Theatre Commander assuring the COAS that all efforts will be geared towards bringing the war against terrorism to a decisive end.

The COAS appreciated the commitment and selflessness of the troops in the Theatre and implored them to exhibit a high level of professionalism and ensure that all remnants of Boko Haram and Islamic State of West Africa Province (ISWAP) terrorists are neutralised.

Also there is a trending story of a Nigerian soldier which is receiving commendations for saluting the Chief of Army Staff, Lt Gen Faruk Yahaya, while on his sick bed.

The injured trooper was captured paying respect, even in distress, when Yahaya visited wounded forces at the 44 Nigerian Army Reference Hospital in Kaduna.

It was observed that social media users are posting the photo which they say depicts the huge respect military personnel accord their superiors.

In his remarks, the COAS thanked the officers and men for their sacrifice to the nation and assured that the Army will adequately take care of them.

Yahaya disclosed that all arrangements have been concluded for personnel that require medical treatment abroad.

Those who require plastic surgery, prosthetics, among others will be flown out of Nigeria.

The Army chief announced plans to build a state-of-the-art facility in the hospital for the production of prosthetics.

The General said efforts on this have been heightened in partnership with some foreign experts from Germany.

The Chief Medical Director of the hospital, Colonel Steven Onuchukwu, led Yahaya round the wards.

The Army Chief had earlier pledged to abide by the respect for the Human Rights of all Nigerians. His whistle stop visits to hospitals is surely a good step to practicalise his promise to respect and promote human rights.

The Chief of Army Staff, Faruk Yahaya, had earlier made a Solemn pledge to prioritise welfare of personnel, entrench professionalism and celebrate gallantry by leading with sincerity, transparency and accountability.

He made the promise during his maiden interaction with the Principal Staff Officers (PSOs), field and corps commanders in Abuja.

He said the task ahead was enormous, urging the officers and soldiers to rise in the defence of the nation.

The COAS also pledged to provide an exemplary leadership and conscientiously follow the standing operating procedures of Nigerian army by ensuring that army “becomes a formidable force for national defence and security’’.

According to him, for the Nigerian Army to be competitive in the 21st century, it must remain professional and seek to develop competencies that would make it ever ready to undertake its constitutional duties.

“It is, therefore, against this background that my mission which is a professional Nigerian Army is ready to accomplish assigned missions within a joint environment in defence of Nigeria.

“To achieve this goal, my command philosophy will rest on four pillars, namely: Professionalism, Readiness, Administration and Cooperation.

“We must return to the tenets of adhering strictly to customs and tradition and ethics of our army and put in place a formidable Nigerian Army.”

Interestingly, the gentleman has started well by promoting greater regard to the wellbeing and welfare of his men and officers who are making the supreme sacrifices to safeguard the territorial integrity of the Federal Republic of Nigeria.

However, going forward, he needs to broaden his scope of partnership to include credible leaders and stakeholders in the civil rights organisations so the conversations began by Lieutenant General Tukur Yusuf Buratai in consolidating the structures of civil, military relations are elevated and made sustainable.