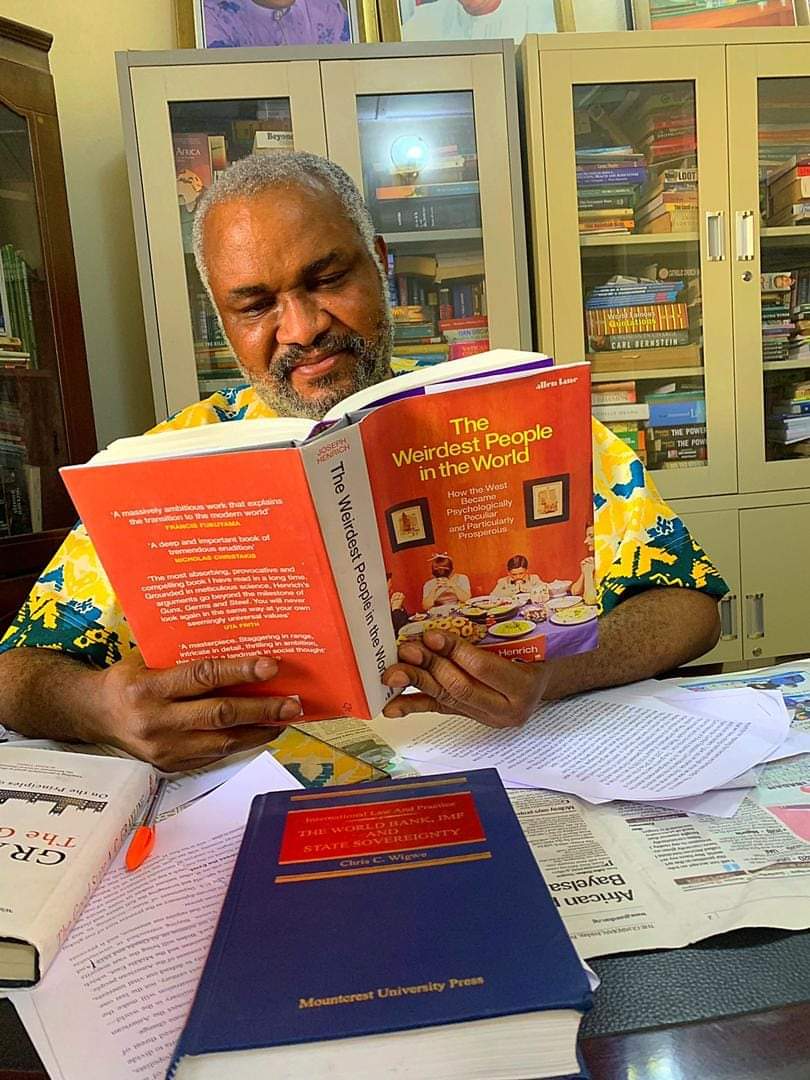 Frequently described as overstretched and underfunded, Nigeria’s military forces are fighting jihadists in the North-East and armed gangs in the North-West as well as dealing with communal conflicts in central regions, separatist tensions in the South-East and piracy in the nearby Gulf of Guinea.

According to Ikemesit Effiong, head of research at SBM Intelligence, a geopolitical consultancy firm, “Nigeria is in a precarious situation. Every part of the country is dealing with a near-existential security challenge.”

Effiong who spoke to AFP recently, further noted that Nigeria has on-going military operations in 35 out of the country’s 36 states.

True and more specifically, the nation is confronted by a mix of new-to-country insurgency driven by the Boko Haram – gradually morphing into an enlarged asymmetric conflict with the African wing of ISIS (called ISWAP), which has access to sophisticated weapons and foreign funding.

Throw in flagrant banditry, kidnap for ransom, sundry sabotage, cattle rustling and rogue herdsmen activity, then a fair picture of the nature of the extant challenges can be appreciated. Against this background, the office that manages the national security through various critical interfaces with the relevant security agencies, the Office of the National Security Adviser, at this or indeed any other period, is understandably put on the spot.

Traditionally, the federal government led by the Commander-in-Chief of the Armed Forces and Executive President-Muhammadu Buhari- working with the branches of the military with coordination from ONSA reviews national security situations from time to time.

The ultimate aim is to reposition the armed forces in the context of the fight against terrorism and imperative defence of the nation’s territorial integrity.

Taking in the big picture, a strategic national crisis containment response plan falls squarely within the purview of the Office of the National Security Adviser (ONSA). In Nigeria, it is the ONSA, currently led by Major-General Babagana Monguno (retd) which deals with the key issues, determines and coordinates the intervention templates in synergy with other relevant security organs.

Despite clear misinformation by some detractors, the Boko Haram insurgency is much weaker today than in 2015. This much was attested to by the man in the eye of the storm – Governor Babagana Zulum of Borno on Dec. 6, 2020. He articulately cut to the heart of the matter.

According to Zulum, “From state-wide statistics on affairs in the 27 Local Government Areas since 2011, the fact is that in spite of recent happenings, the security situation in Borno State and indeed that of the entire North East sub-region is still far better under President Muhammadu Buhari, and this is based on records.

“For instance, unlike the years before Buhari when a number of local governments were no-go-areas, we now have indigenes safely back to Gwoza, Askira-Uba, Dikwa, Ngala, Monguno, Kukawa, Damboa, Konduga, Mafa and led by our traditional leaders, which no one could have visited not to talk of living there.”

There is more: “Our Emirs were all in exile. Today, Bama is coming back to life and so is Askira-Uba, Damboa, Gwoza and others. Life is even returning to Baga. This was impossible before Buhari.

“In fact, it was not possible to move a few kilometres out of Maiduguri. Insurgents were so bold to attack and take over military facilities, like the Army Barracks at Monguno, Bama, Giwa Barrack and Multinational Joint Task Force Headquarters at Baga, to mention just a few.

“There were daily bomb blasts in many parts of Maiduguri, the most populated part of the state, but all these have stopped under President Buhari. These are the records and no one can dispute them.’’

More specifically, from March 18 to December 30, 2020, the nation’s military forces, neutralised 2,403 criminal elements across the country. These include terrorists, bandits, kidnappers, cattle rustlers, et cetera. This to scores of other terrorists and armed bandits killed during special airstrikes.

Equally, 1,910 criminal elements were arrested and a large cache of arms, ammunition and equipment were recovered during the period. Troops also rescued a total of 864 kidnapped victims across the country.

In the Southern theatre, a total of 9,684,797 litres of stolen diesel and 33,516,000 litres of kerosene were recovered. Furthermore, a total of 46,581.8 barrels of stolen crude oil and 22,881,257 litres of stolen petrol were recovered by the troops of the Armed Forces of Nigeria.
From specific field data, military anti-insurgency and general security operations conducted in the North-East and North-West within the referenced period showed that 200 kidnapped victims were rescued by troops of Operation LAFIYA DOLE. A total of 1,385 rounds of ammunition, 45 grenades as well as 95 assorted rifles were recovered from BHT/ISWAP fighters.

Additionally, several gun trucks were captured, while some others were destroyed during airstrikes. 1,805 insurgents/terrorists including commanders were killed by troops aside from scores killed through air raids/attacks. Within the period, 79 arrests were made including high-value targets.

More, 6,951 rounds of ammunition and 120 assorted rifles were recovered from bandits by the gallant troops in the zone. 455 kidnapped victims were rescued and 473 armed bandits killed. 461 arrests were made in the zone including high profile bandits, gun runners and bandits’ collaborators.

Troops of Operation AWATSE in the South-West Zone, between 18 March and 30 December 2020, impounded 10,458,600 litres of petrol; 15,345 barrels of stolen crude oil and 345,000 litres of stolen diesel. Additionally, troops recovered 3,594 rounds of ammunition and 14 assorted rifles. Also, within the period, 23 illegal refining sites were immobilised, while 15 boats and 23 trucks engaged in illegal activities were impounded. In the same vein, within the period 35 kidnap victims were rescued, while 48 arrests were made.

Looking at a wider time-frame of achievements, in the North-East, the nation’s armed forces have since 2015 recorded significant achievements in the fight against terrorism. The first actions of the Buhari Administration in that regard include revitalisation of the Multi-National Joint Task Force comprising Nigeria and her neighbours. It then relocated the Military Command and Control Centre to Maiduguri in June 2015 and subsequently launched Operation Lafiya Dole in July 2015.

The capture of Boko Haram’s operational and spiritual headquarters, “Camp Zero’’, in Sambisa Forest, in December 2016, represented a major conquest.

Turning to another critical area of military preparedness, the federal government is investing heavily in military hardware, including 23 new aircraft that have already been delivered and inducted into service, while another 18 manned aircraft and eight Unmanned Combat Aerial Vehicles (UCAVs) are being awaited, in 2021/2022.

This is in addition to attack boats, patrol vessels, armoured tanks and so on.

The Army established ‘Special Mobile Strike Teams’ in the Northeast, while the Air Force has established or is establishing new bases in various parts of the Northwest and North Central (Benue, Nasarawa, Taraba, Zamfara, Kaduna, and Katsina).

The Exercise, codenamed “TAIMAKO YAZO”, was aimed at simulating tactics, doctrine and synergy amongst first responders for effective CSAR operations of downed aircrew or other NAF personnel who have had to eject or abandon their aircraft in emergencies

The air force will conduct a total of six crew rescue exercises between January and June 2021, mostly in the Northwest, particularly in Zamfara and Katsina States.

Going forward, the crucial proactive retooling, in terms of more hardware and equipment acquisition, rejigging of administrative architecture to boost morale and strengthening the supportive role of the military in democratic governance becomes even more apparent.

More, according to Bulama Bukarti, Africa analyst at the Tony Blair Institute for Global Change, the replacement of the nation’s Service Chiefs won’t bring overnight change but is a key first step.

“There needs to be a complete review of the counter-insurgency strategy,” said Idayat Hassan of the Abuja-based think tank, the Centre for Democracy and Development. It could be recalled that in 2019, the army launched its “super camps strategy”, reducing the number of smaller bases and fortifying larger ones in an attempt to limit exposure of troops on the ground.

“They were trying to reduce military fatalities but it gave insurgents more freedom of movement. If that doesn’t change, the insurgents will continue to wreak havoc in rural areas and mount checkpoints on roads,” said Bukarti.

It is against this background that the necessity to further reposition the nation’s military into a highly professional and disciplined force is imperative. Focussed measures that address capacity building initiatives for effective, efficient deployments in proactive response to national security imperatives must take centre stage.

No military can successfully prosecute offensive or defensive campaigns without adequate arms, boosted personnel morale and adequate welfare. Approved spending budgets on hardware must be expeditiously released to have any impactful effect. Here, the National Parliament must complement the executive in ensuring the fighting forces get the needful. Here also the ONSA plays a crucial role and must not be undermined.

Among the new appointments by the President are Lt-General Leo Irabor as Chief of Defence Staff and Lt-General Ibrahim Attahiru as Army Chief, both seen as experienced field commanders. Vice Admiral Awwal Gambo, Chief of Naval Staff and Air Marshal Isiaka Amao, Chief of Air Staff, respectively, are also competent hands, going by their professional trajectories.

Going by what we’ve seen so far, how closely they have been working with ONSA, carrying out stakeholders’ engagement across the country and assessing the state of insecurity one can perhaps predict a redirection of the Security Architecture of the Nation to bring about renewed successes against these agents of insecurity.

At this period, maximum cooperation with ONSA, professionalism and loyalty to the constitution must remain a key footing.

Adelabu, an attorney writes from Lagos.

Another win for Oando shareholders as court rules against SEC