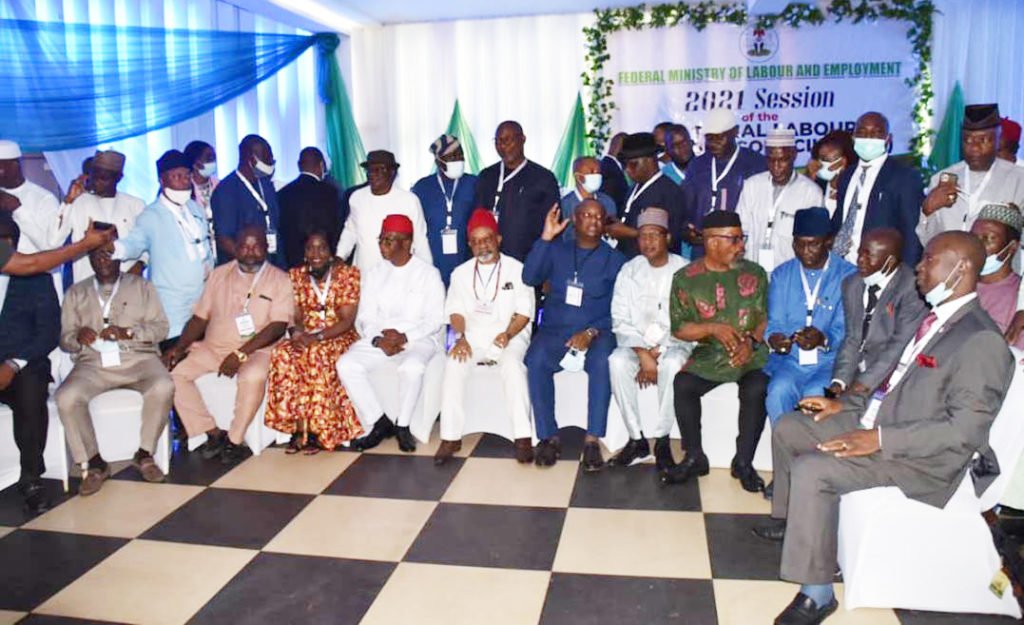 March 22, 2021 was an outstanding day for the labour community in Nigeria. On that day, the Federal Government inaugurated the National Labour Advisory Council (NLAC) at Owerri, the capital of Imo State. The Minister of Labour and Employment, Senator Chris Ngige performed the inauguration on behalf of President Muhammadu Buhari.

The tripartite body will serve from 2021 to 2025 and is expected to offer advisory services to the Minister of Labour on administration, employment relations and labour productivity, amongst others. NLAC is established in line with the International Labour Organisation (ILO) Convention 144, on Tripartite Consultation and Social Dialogue, which Nigeria has already ratified.

Recall that the leadership of the Nigeria Labour Congress (NLC) had on several occasions urged the Federal Government to ensure the immediate reconstitution of the NLAC. One of such occasions was an interactive session of the NLC with the International Labour Organisation (ILO) in 2018. Suffice to say that plans were already underway for the inauguration when the deadly COVID-19 struck in the first quarter of 2020.

Just like other countries of the world, Nigeria took steps to stop the spread of the COVID-19 pandemic, introducing lockdowns and other measures, such as domestic and international restriction on movement. The consequences were however grave on the economies of countries, leaving the labour sector in dire straits.

“Workers and businesses are facing catastrophe, in both developed and developing economies…We have to move fast, decisively and together. The right urgent measures could make the difference between survival and collapse,” said Guy Ryder, ILO Director-General on April 7, 2020. Worldbank.org reported that by June 2020 in Nigeria, 45 percent of workers in the informal sector had stopped working as a result of the COVID-19 pandemic.

The severity of the COVID-19 on the labour sector in Nigeria therefore underscores the import of the recent inauguration of the NLAC in Owerri. Many of the stakeholders in attendance, including social partners, were of the view that the 60-man council couldn’t have come at a better time. Each state of the Federation has a member each while the social partners, such as NLC, Trade Union Congress (TUC) and Nigeria Employers Consultative Association (NECA) were fully represented in the council.

Apart from Ngige, others from the Federal Ministry of Labour and Employment include the Minister of State, Festus Keyamo SAN, the Permanent Secretary, Peter Yerima Tarfa and Directors of the Ministry. The Governors of Imo (Host), Abia and Ebonyi state were represented at the meeting, which attracted the leaderships of NLC, TUC and NECA.

In his speech, Ngige recalled that no meeting of the council had been convened since 2014, owing to a lot of factors, including but not limited to paucity of funds and other administrative issues that could not be avoided.

According to him, although the council has been inactive, the Ministry in the spirit of Tripartism has ensured and maintained a sound tripartite relationship with Social Partners.

Ngige also assured of the government’s commitment to stemming the current negative effects of the global financial and economic crisis on employment by strengthening the machinery of tripartism and social dialogue.

He said the NLAC was established in 1955 to offer advisory services to the Honourable Minister of labour on areas of labour administration, employment relations and labour productivity.

“The position of NLAC became formalised into our labour practice with Nigeria’s ratification of ILO convention No 144 (1976) on Tripartite Consultation between public authorities and employers and workers organizations at National and Industrial level in 1994.

“The NLAC is a category ‘B’ Council under the classification of statutory bodies in Nigeria. The NLAC has a critical role in promoting and ensuring best practice of labour administration in line with international standards.

“It is hoped that with the passage of the labour Institutions Bill in the not too distant future, the status of the council will be enhanced and repositioned to effectively discharge its responsibilities.

“When enacted, the bill will widen the scope, functions and nomenclature of the existing council. It is my belief that these functions and responsibilities, if well executed, will result in better industrial relations practice which is key to national growth and development.”

Ngige recalled the series of industrial unrests in the country in the last one decade with its attendant negative consequences on sectoral and national productivity, including social and economic crisis in the world of work.

He said the situation has created the urgent need to combat this growing phenomenon at the institutional level through harnessing the values and functions of the NLAC in our labour administration system.

Osinbajo who attended virtually, noted that NLAC provides a chance for the tripartite actors to take advantage of the culture of dialogue it provides in the world of work to strengthen the span of workplace cooperation and entrench social peace, which could reduce strikes as the default mode in trade disputes.

He noted that strikes have proved to be disruptive and notably dangerous especially on account of the fragility of our economies in the wake of the COVID-19 fallouts, besides inflicting an adverse spiral effect on job retention and creation, all of which we simply cannot afford now.

Osinbajo said he was proud of Nigeria’s standing in the ILO and her adoption of eight core/fundamental conventions, two of the four governance (priority) conventions and 30 technical conventions. He encouraged the council as a unified body to use the medium to advance the 2030 Sustainable Development Goals (SDGs) agenda, particularly goals 1, 5, 8, 10 and 16 with their relevant subsumed targets as well as agenda 2063 of the African Union.

Osinbajo thanked social partners immensely for their cooperation, especially as the fallout of the pandemic devastated the Nigerian economy, noting that the incidence of retrenchment and redundancy was not as much as initially feared, while workers also showed some understanding in their demands.

According to him, the Federal Government ensured that despite two cycles of recessions in six years and severely dwindled national resources, jobs were not lost for this reason, adding that the government not only implemented the new minimum wage but initiated a legislation passed by National Assembly to ensure that minimum wage earners would pay no income tax.

In a goodwill message, David Dokernoo, the officer in charge of ILO Abuja Country Office who delivered a goodwill message on behalf of the ILO Director-General, said NLAC has a role of promoting social dialogue between government and the social partners. “The ILO is therefore very glad to note this giant step aimed at reviving the NLAC,” he said. Dokernoo added that the apex global labour body would like to work with the Ministry and social partners in sustaining this revival.

The President of NLC, Comrade Ayuba Wabba commended President Buhari for the initiative made through the Minister of Labour in constituting the NLAC, saying he was delighted to be part of this epoch making event in labour relations in Nigeria.

The labour leader used the opposition to reiterate the opposition of the organised labour to the minimum wage bill at the National Assembly, commending Ngige for coming out to state the position of the Federal Government on the bill. He said the ILO conventions on the issue of minimum wage were clearly spelt out and all member countries were expected to abide by them.

“I will not conclude this goodwill message without reminding us of this critical time we live in. The outbreak of the novel corona virus pandemic has made a huge dent on the world of work.

“Millions of workers all over the world have lost their jobs. Many workers have slipped from the precipice of wage employment to precarious jobs, thus ballooning the population of the community of working poor.”

He called on the social partners to strengthen their commitment to widening and deepening the social security net for our workers and people. He commended the Federal Government for the efforts to safeguard jobs at this critical time and urged the government to do more.

He equally commended the employers in the private sector and urged them to keep faith with the spirit and letters of the memorandum of understanding signed with workers representative organizations in Nigeria on April 15, 2020.

Similarly, the Chairman of Trade Union Congress (TUC), Quadri Olaleye represented by his deputy, Oyinkan Olasonye, praised Ngige for being hardworking and industrious, but said they will continue to knock on his door “until we have total industrial peace.”

“Let us not forget that the new normal has brought about flexibility at work places of which remote working is one aspect. Employers must be committed to social protection, decent wages et al.

“Similarly, I appeal to government to assist by making laws that would ensure that employers, especially those in the organised private sector stop espousing anti-union agenda.

Now that NLAC has been put in place, it is hoped that government and employers would no longer deny workers the right to participate in decisions affecting them. Hence, expectations are high that there will be a more harmonious labour sector in the country.

Nzomiwu, a journalist and public affairs analyst writes from Abuja.