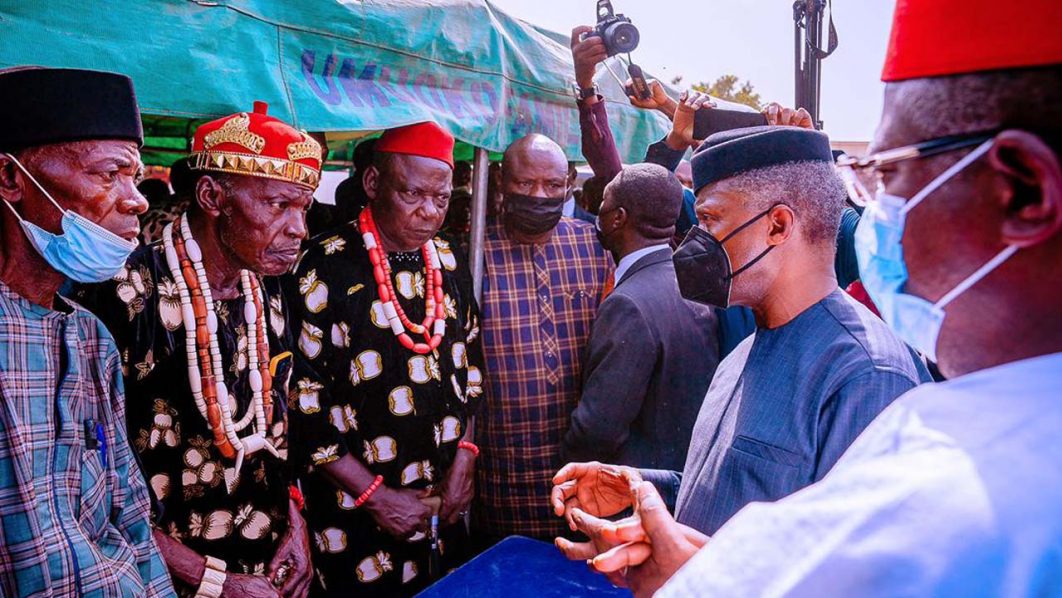 Osinbajo visited Ededege in Isielu LGA and and Effium in Ohaukwu LGA in Ebonyi State first to commiserate with the families and secondly to engage with leaders of the communities on some pertinent issues. Photo/TWITTER/PROFOSINBAJO

The Federal Government has pledged to ensure justice for victims of the recent attacks on three communities of Ishielu Local Government Area of Ebonyi, by unknown gunmen.

Vice President Yemi Osibanjo made the pledge on Sunday in Abakaliki while addressing stakeholders of the state after inspecting the affected communities and the Effium/Ezza-Effium intra-communal crisis.

Osibanjo, who commiserated with the government and people of the state over the unfortunate incident, promised that the assailants would be arrested and duly prosecuted.

“I convey the condolences from President Muhammadu Buhari as there is no justification whatsoever for the killings and destruction of property.

“The killings must be condemned in its strongest terms as the victims must have lived together for long with those who may have killed them,” he said.

The Vice President said that it was the responsibility of federal, state, and local governments to ensure that such killings did not occur.

“I am, however, pleased that at the Egedegede Community, the political leaders found some facts and evidence which would help security agencies in their investigations.

“This would help trace the perpetrators of this terrible act but our duty as political leaders is to maintain absolute peace in areas where we serve as leaders,’’ he said.

He pledged that the Federal Government has beefed security in the affected areas and other parts of the state by deploying additional soldiers and police personnel to the areas.

“We need to ensure that relief is sent to the affected areas as the National Emergency Management Agency, among other relevant agencies, would be mobilised to assist the people with relief materials,” he said.

Gov. David Umahi thanked the Vice President for accepting to be sent by Buhari to visit the state in its mournful situation.

“You must have been reading in newspapers and the social media the number of insults which southeast governors receive for their efforts to ensure the unity of Nigeria.

“I thank God that we prevented a serious retaliation when the incident occurred but as the chief security officer of the state, I cannot control the situation if such an attack re-occurs,” he said.

Chief Martin Elechi, the immediate predecessor of the current governor, urged the Federal Government to immediately stem the spate of killings and destruction across the country as it was becoming embarrassing.

Chief Eni Uduma, Representative of the Association of Local Governments of Nigeria (ALGON) Ebonyi Chapter, said that the people could longer tolerate the incessant killings and destructions of their property by those suspected to be herders.