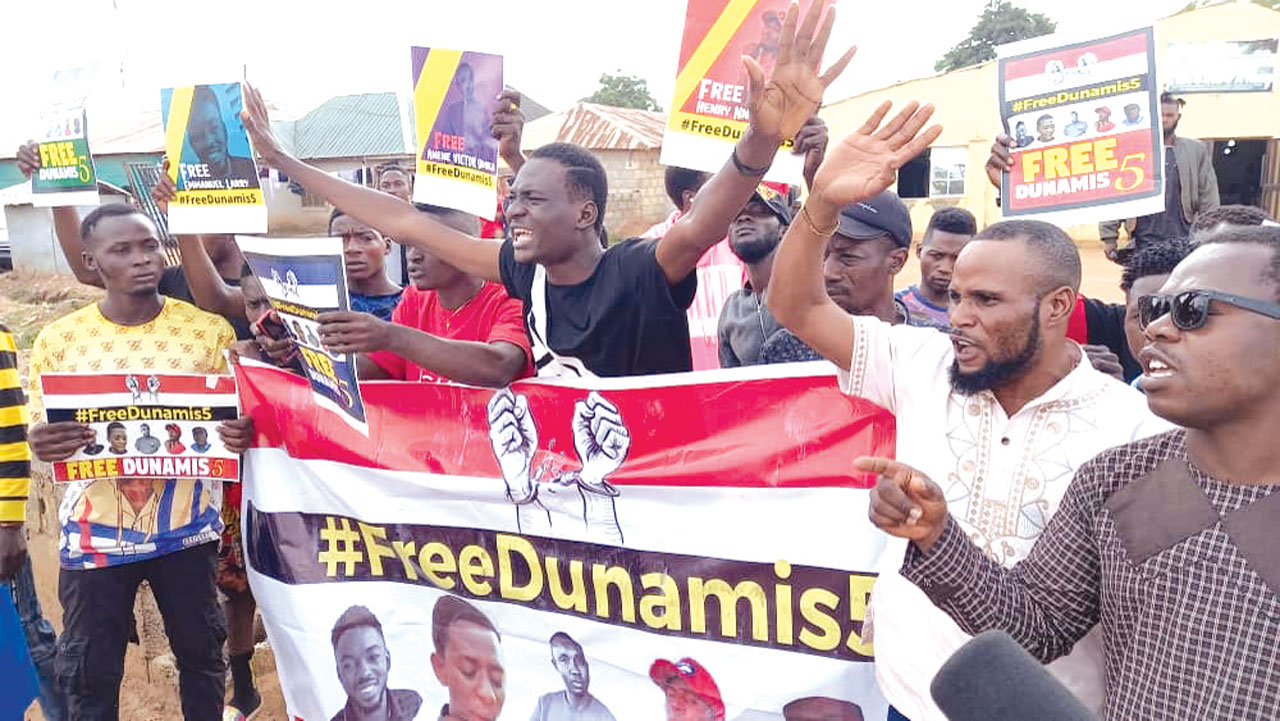 This is a journalist working with the Cable Newspaper, Deji and a cameraman attached to the AGTV, Jeromi Godwin, who wanted to report the proposed protest, were arrested and detained for over four hours at the church security post.

Following the arrest of five youths wearing ‘Buhari Must Go’ T-shirts to the church during the last week Sunday service by the Department of Security Services (DSS), the pro-democracy campaigner  had threatened to organise a mass protest if the affected youths were not released within seven days.

However, the heavy presence of the police and other security operatives in and around the church did not deter worshippers, who were received warmly by ushers.

Inside the church, the atmosphere was charged up with melodious music from the choir and the congregation danced excitedly, not minding whatever was happening outside the auditorium.

At exactly 10.45a.m.,  the founder of the church, Pastor Paul Eneche, delivered a sermon, read  from I Chronicles 4: 9-10 and did not make any reference, directly or indirectly, to the planned protest.

Speaking on the topic. ‘Replication, multiplication and enlargement power of prayer,’ Enenche observed that prayer was critical to every facet of human existence and could enlarge one’s capacity.

He said: “The power of multiplication is real. Everything in man’s hand has a limit, but everything in God’s hands has no limit. We are not wasting our time serving God.

After the service, The Guardian reporter noticed  some persons sat on the bare floor inside the security house and went back to ascertain but on reaching there, the two men who were journalists, were released.

The AGTV cameraman, Jeromi Godwin, who narrated his ordeal to The Guardian, said: “As soon as I alighted from the car, one security man accosted me and asked where I was going to and I told him that I was coming to the church and he asked whether I work in the church media section and I said yes. He then said okay, follow me and they kept me in their security room from 7.30 a.m. till 12.45pm.

They collected my phone so that I will not be able to make calls.” But the  AGTV reporter, Jethro Iliya, who described the detention of the reporter as unjust and unprofessional, lamented that despite presenting his identification card, the cameraman was detained like a criminal for hours

Another journalist, Ayodeji Owolabi of The Cable Newspapers, who was also detained, told The Guardian that he was detained from 7.30a.m. to 12.45p.m. despite showing them his identity card.

Sound Sultan buried in US [VIDEO]

Sound Sultan buried in US [VIDEO]