Diri charges military, other agencies on collective approach to security 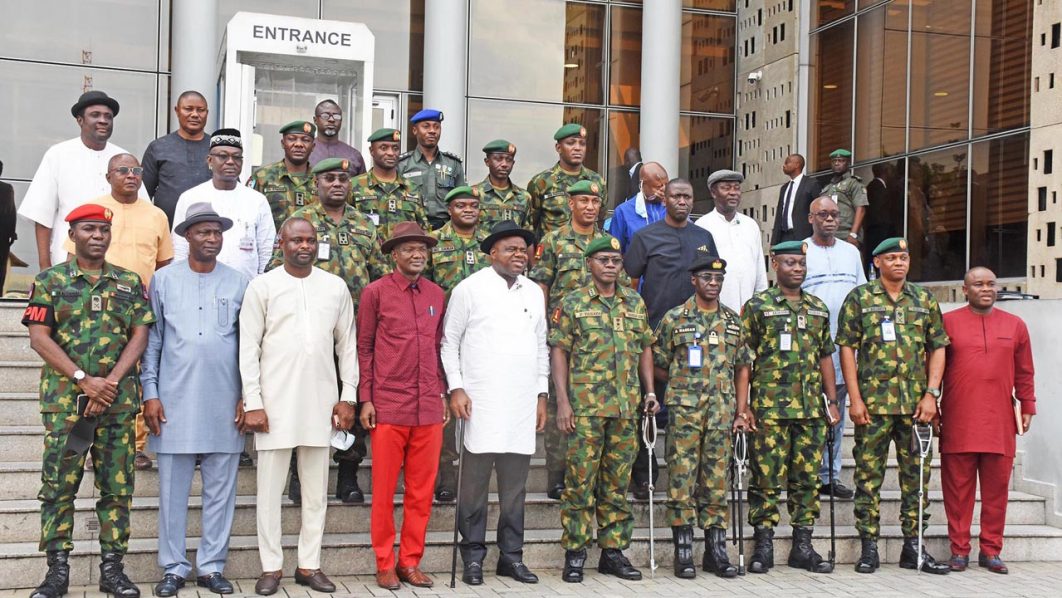 Bayelsa State Governor, Douye Diri, has said for Nigeria to attain greatness, the military and other security agencies need to collaborate with the people to end insecurity in the country.

Diri stated this when the Chief of Army Staff, Lt.-Gen. Farouk Yahaya and other senior military officers visited him at the Government House, Yenagoa.

In a statement issued by his Chief Press Secretary (CPS), Daniel Alabrah, yesterday, the governor restated the need for all Nigerians to join hands to accelerate the country’s development.

His words: “We cannot afford to dismember our country because we need to be together to make this country one of the best. This can only be done when we work together as a people whose development had been stunted and which we are and striving to facilitate.”

Speaking, Yahaya noted that he was on an operational visit to the 16th Brigade, under the 6th Division of Nigeria Army and the Joint Task Force (JTF).

He commended the state government for its support to security agencies, which is aimed at enabling them to perform their duties optimally, and solicited the people’s cooperation in checking criminal activities in the state.

BESIDES, Diri cautioned his appointees, especially those from Bayelsa West Senatorial District, against premature politicking ahead of the 2023 elections, saying such appointees should resign or be sacked if found wanting.

Speaking before the commencement of the weekly State Executive Council meeting in Government House, Yenagoa, he frowned on the activities of some of his appointees, which he said, were heating up the polity ahead of the 2023 elections, stressing that it is too early for open politicking.

The governor stressed that although people had the right to aspire to any political office, the time was not yet ripe for politicking.

Diri reminded his appointees that the administration lost considerable time last year to the COVID-19 pandemic and litigations, stressing that he was in a hurry to deliver on his campaign promises and could not afford to waste time politicking.

He wondered why appointees would be involved in open politicking when the Independent National Electoral Commission (INEC) had not even released a timetable for elections.

While congratulating them, he said their appointment was based on merit and in line with his campaign promises.

He charged them to avoid friction with commissioners but cooperate with them to deliver development to the Bayelsa people.

MEANWHILE, the state chapter of the National Union of Local Government Employees (NULGE) has commended Diri for his financial for councils in the state that have ensured prompt payment of workers’ salaries.

State President of the union, Comrade Akpos Ekiegha, gave commendation when the leadership of the union visited the governor in Government House, Yenagoa.

Ekiegha disclosed that council workers in the state now enjoy the national minimum wage, as a testament to Diri’s prosperity government.