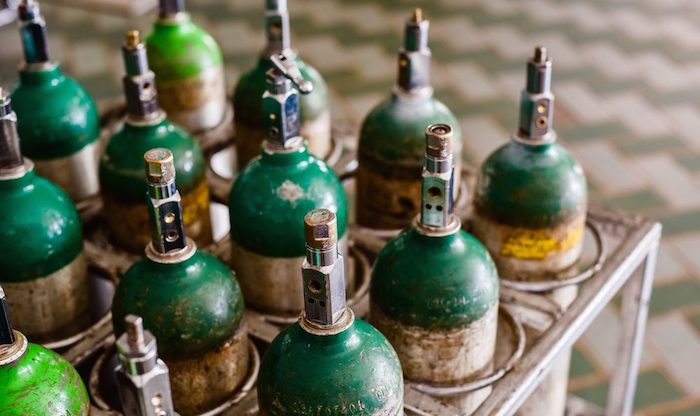 As demand for oxygen spikes in isolation centres to keep patients alive, the use of oxygen generators is becoming a trend for household treatment of COVID-19, and medical device suppliers are rising to the occasion.

Oxygen can be generated domestically in households through these devices, as opposed to the one manufactured from plants but having limited capacity in meeting the needs of patients that require oxygen therapy.

Suppliers are now pushing to the market, products branded ‘household oxygen generators’, a development that decentralises access to oxygen, the way electricity generators have done to households for several decades in Nigeria.

One of these products to generate oxygen by a company called Torrent Engineering Limited, for instance, touts the capacity to generate up to seven litres of purely filtered oxygen every minute.

With features including nasal oxygen tube, remote control, power cable, filter felt and sponge, a COVID-19 patient can be managed from home and monitored under a supply flow that can last for about 48 hours.

Suppliers like Torrent have seen demand more than double what they used to receive during pre-pandemic periods, likewise price.

For them, the recent scarcity of oxygen especially at Lagos COVID-19 isolation centres and the demand surge that followed patients’ rush after alternative sources meant smiling to the bank.

“Our demand rate has doubled now, even more than 100 percent. Seeing the lack of oxygen supplies, so many people who are in home isolation can use these machines instead of running for oxygen,” Chulani said.

Most COVID-19 patients that slip into severe conditions often suffer low oxygen saturation and the second wave featuring new variants of the coronavirus has been more infectious.

Other suppliers of the oxygen generators like Zubis Surgical Limited are on the cusp of running out of stock.

The challenge before Ugwu Izuchukwu, chief executive of the company now is the difficulty around importation to ease for more stock to flow in.

The generators are mostly imported from Nigeria’s top trading partner, China, and hurdles of importation place the cost on the high side locally.

“The demand is currently on the high side due to being an essential commodity procured for the fight against coronavirus. But most times we run out of stock due to the high demand and difficulties facing importations. That has been the major cost of the high rate in price,” Izuchukwu told BusinessDay.

There is no doubt the pandemic has challenged and disrupted public health infrastructures. At the same time, it is throwing up opportunities for businesses, investors and entrepreneurs to exploit.

Even the Federal Government has been jolted into reality, although not for profit. President Muhammadu Buhari last month approved N6.45 billion for building 38 oxygen production plants across the country, in a bid to contain the second wave of COVID-19.

Also, the Lagos State government activated a plant within the premises of the Infectious Diseases Hospital (IDH), Yaba, to increase capacity for production.

The local market size is not known, but businesses are ready for the pie.

According to Saliu Oseni, a surgeon at a federal hospital said the devices are not new to the medical field but the COVID-19 crisis has shot the need to unusual levels as scarcity of plants-generated oxygen pervade treatment centres.

He, however, advised it is best to use these oxygen generators complimentarily, in cases of shortages, noting that it is a therapy that should be administered on a doctor’s prescription to avoid complications.

According to Steve Ahubelem, a medical officer at the General Hospital – Ibeju-Lekki, “It gives about 70 percent (of oxygen), it does not give 100 percent. It is just something you can use pending when you get the full oxygen cylinder. The oxygen in those concentrators is not as much as the one in the cylinder”.