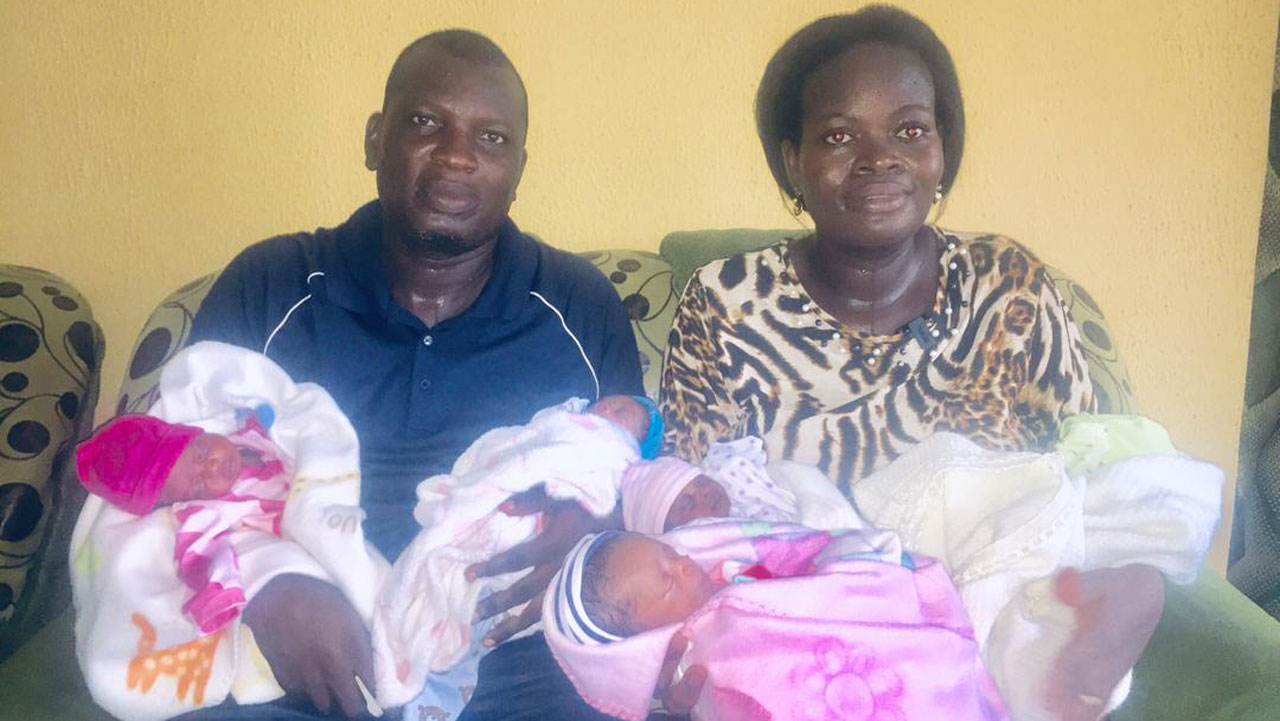 The year 2020 would not be forgotten in a hurry for the Omages. After getting married in 2014, Mr. Ewanle and Mrs. Foyeke Omage, like every other couple, expected a baby to complete their joy of matrimonial life, but things did not work out as expected.

They waited day and night, expecting the good news, but nothing happened. The thought of childlessness made Foyeke’s worries increase, as she became a subject of ridicule among family, friends and neighbours .

Luck, however, smiled on Foyeke in 2020 during the COVID-19 pandemic. She became pregnant. The thought of pregnancy never crossed her mind as she had given up on having children of her own.

Her husband, Ewanle, speaking at their residence in Egbeda, Lagos, narrated: “My wife went to the hospital. She called me that the doctor told her she was pregnant. I said that was great. When she went for a scan, the doctor told her she was pregnant with four babies and she called me to tell me the new development.  I shouted with happiness and at the same time,
I asked her how we were going to cope because of the economic hardship in Nigeria.

“The third time she went for the scan, the doctor told her, he was no longer seeing four but five babies. We were thanking God, but at the same time scared of how we were going to take care of them. ”

Omage, who is a level-eight civil servant at the Rubber Research Institute of Nigeria (RRIN), told The Guardian that his wife had to quit her marketing job after she was told by the consultant at the Lagos State University Teaching Hospital (LASUTH), Ayinke House Ikeja, on December 8, 2020, to have bed rest as a condition like hers had never been handled in the hospital since its establishment.

Foyeke was admitted in the hospital till the day of delivery on January 18, 2021, when she was delivered of her quintuplets through a Caesarian section. Foyeke and their five babies were discharged on January 29.

Omage said throughout the period of the pregnancy and delivery, he had spent all the money the family saved and even went a-borrowing to offset the medical bills for the mother and children to leave the hospital.

He, therefore, called on Nigerians, the federal and state governments, as well as non-governmental organisations, corporate bodies and religious leaders to help his family with the upkeep of the children.

“We want to thank Nigerians for their assistance since my wife delivered. We are soliciting help from the federal and state government, NGOs, corporate bodies, religious leaders and well-meaning Nigerians to help us for the upkeep of our five babies. When we were two, it wasn’t easy, let alone now that we are seven,” he said.