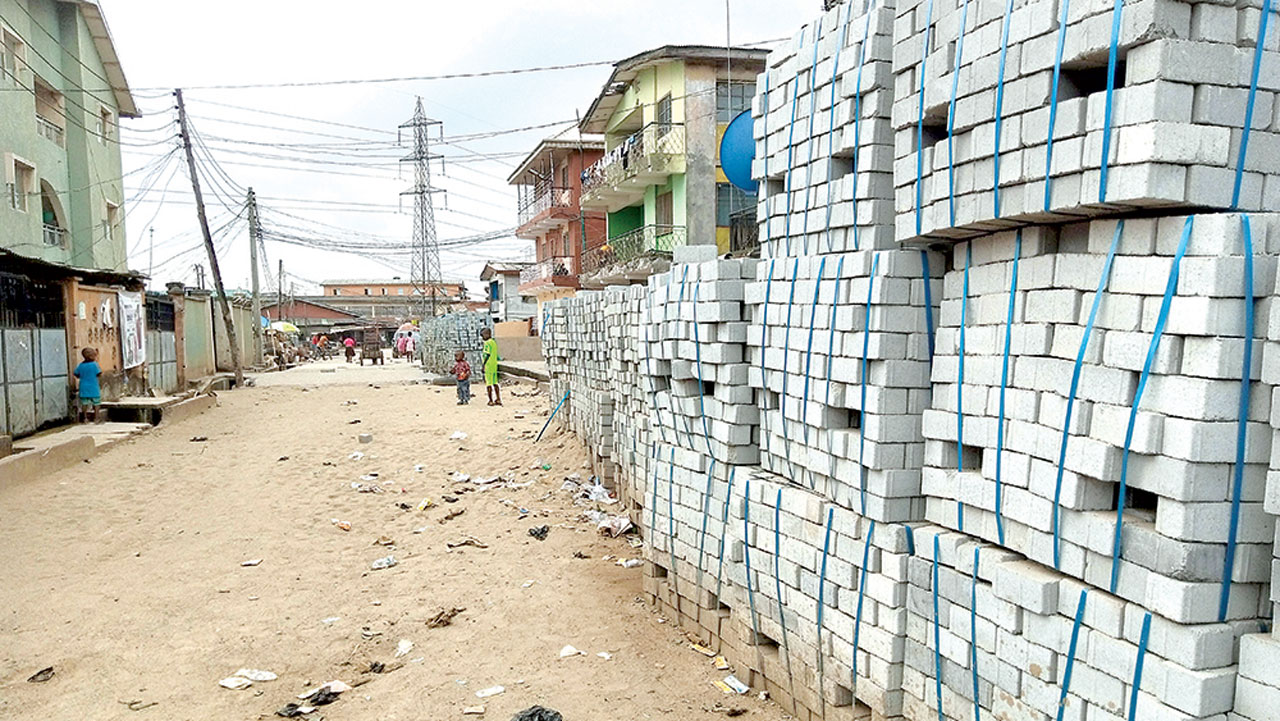 Some of the packed interlocking stones

One year after Governor Babajide Sanwo-Olu flagged off execution of 377 statewide projects across all wards in the state, one of the projects has been abandoned by the contractor.

The projects were conceived in response to requests by the various communities across the state to address specific challenges, hence they were not universal but diverse, reflecting the needs of each ward.

The intervention was said to be first of its kind in the state and included the construction of over 250 roads and installation of 23 power projects. The reconstruction of Fashiro Street, in Mazamaza area of Oriade Local Council Development Area (LCDA) was one of the projects.

While flagging off the projects, the governor said: “The statewide 377 ward projects being launched today are state intervention projects in grassroots development.

“The implementation of the projects will commence immediately after this official flag off, as contractors have been fully mobilised to move to site. I urge residents, who are the ultimate beneficiaries of these projects to take ownership by monitoring the implementation process and ensure that the job conforms to quality and standard specified in the project design.”

Also, Chairman of the Projects’ Implementation Committee and the State’s Deputy Governor, Dr. Obafemi Hamzat, said all contractors would be mobilise to sites immediately, noting that the intervention was in demonstration of the Governor’s campaign promise to run an inclusive Government.

Hamzat stressed that the projects selection followed a meeting between the governor and all 377 councillors across the state, during which Sanwo-Olu asked them to nominate specific projects that could be executed in their wards.

Efforts to reach the contractor was not successful as there was no signpost announcing the name of contractor, duration for the project and the agency of government supervising the work. The signposts about the project mounted along the street were by the councillor representing the area, thanking Sanwo-olu for the intervention.

A resident revealed that early last month, the contractor reconstructing the road came to grade the road. The source said this was followed up with leveling of the road with a mix of sand, stones and cement. He added that for about two weeks nothing was done on the road, only for the contractor to show up again four days to the Eid Kabir celebration and worked for two days.

According to him, the residents had thought the contractor took a break as a result of the Sallah holiday, but they were wrong, as the contractor has not returned to site. He said the construction work is less than half way completed.

Another resident, Chidimma Onyekwe, said it is unfortunate that government does not care about the plight of residents because most of the roads in the area are in deplorable state.

“This one (Fashinro Street) that is undergoing reconstruction has been abandoned by the contractor after just few days on site. The annoying aspect is that the contractor blocked the road despite it serving as alternative to Old Ojo Road that has become impassable for months now.”

The Guardian contacted the Ministry of Works on the abandoned project, its Public Affairs Director said the project is not domiciled in the ministry.

The Chief Press Secretary to the Governor, Gboyega Akosile, is yet to respond to the message sent to him as press time.