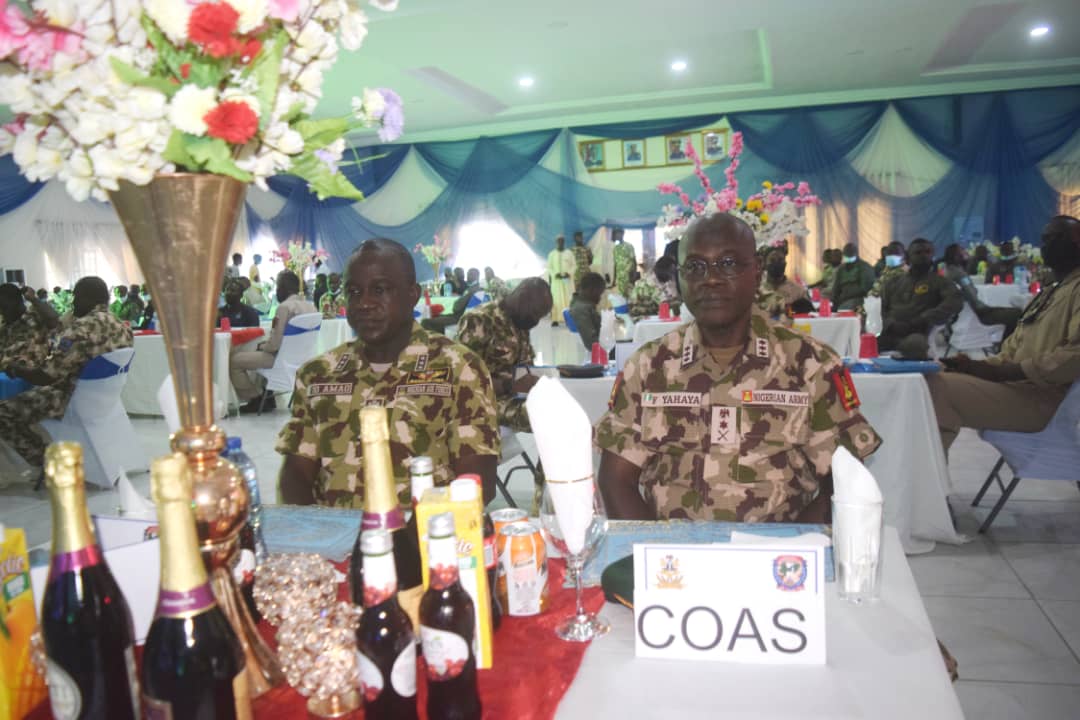 Unity at the highest echelon of the Armed Forces of Nigeria (AFN) was demonstrated by the Chief of Army Staff (COAS), Lt Gen Faruk Yahaya and Chief of Air Staff (CAS), Air Marshal Oladayo Amao when both Service Chiefs feted personnel of the Air Component of Operation HADIN KAI (OPHK) to a buffet lunch at Maiduguri today to mark Eid El Kabir celebration.

In his remark during the lunch, the CAS captured the essence of the visit which he said provided an opportunity to, not only bond with frontline troops but also to promote comradeship and regimentation in the Service.

The lunch, according to the CAS, also provided an opportunity to remember colleagues who have paid the supreme price in the service of the fatherland.

Air Cdre Amao went on to state that the security threats currently facing the Nation and the challenges therein required the emplacement of a robust security architecture capable of rapid employment of airpower in all spectrums of warfare.

According to the CAS, ‘The paradigm shift in the way air warfare is waged in the fulfillment of mission objectives necessitates a highly versatile Air Force capable of executing a wide range of airpower roles across multiple Theatres of Operation to deal with these security threats.’

He also took note of the collaborative efforts between the NAF and sister agencies which has enhanced operational effectiveness of the entire (AFN), while also minimizing the threats posed by insurgents.

He assured the gathering that the NAF will continue to enhance its synergy with sister Services and other security agencies, whilst leveraging each other’s capabilities to secure the Nation.

While expressing pride in the efforts of all NAF officers, airmen and airwomen participating in Internal Security operations in different parts of the Country, Air Marshal Amao stated that the NAF, through the Air Component of OPHK, will continue to perform overly critical roles in providing the much-needed air support for the effective conduct of ground operations by the Land Component.

On the daring survival instincts displayed by Fight Lieutenant Adebayo Dairo, after successfully ejecting from an Alpha-Jet which eventually crashed, the CAS commended NAF and Nigerian Army personnel, who worked tirelessly to locate the crash site and the pilot’s parachute, while also combing nearby locations for the pilot.

Speaking during the dinner, the COAS, Lt Gen Yahaya commended the personnel for their dedication and commitment to counterinsurgency operations under OPHK.

He also went down memory lane to recall his days as the Theatre Commander of OPHK where he enjoyed unfettered access to all the platforms and facilities under the Air Component Commander, while expressing gladness that the cooperation between the Land and Air Component have continued even after his tenure.

Lt Gen Yahaya also singled out the air power characteristics of speed and reach which, when combined with the Army’s ability to hold ground as critical to bringing the current security challenges to a halt.

In eulogizing Air Marshal Amao’s leadership acumen which has seen the NAF operate with renewed vigour, the COAS stated that the inspirational leadership style of the CAS is a key factor to the glaring high level of motivation among NAF personnel.

He commended the Air Component Commander and his staff for their commitment and contributions towards ensuring that peace and stability is restored to all parts of the Northeast.

The COAS and CAS also took time off to pay a courtesy visit to the Executive Governor of Borno State, His Excellency, Professor Babagana Zulum.

The Governor praised both Service Chiefs for the synergy their seeming joint efforts have brought to the battle against insurgents in the State while urging them to sustain the momentum.