Activities were paralysed at law courts in Ilorin, the Kwara State capital on Tuesday, as the Judiciary Staff Union of Nigeria, JUSUN, joined its counterparts across the country for an indefinite strike.

The issue of financial autonomy for the judiciary is the bone of contention, according to the state Chairman of the union, Comrade Ibrahim Sambo, who spoke to DAILY POST at the premises of the state high court while enforcing compliance.

He said the nationwide strike was due to “the failure of state governors to carry out Executive Order 10 signed by President Muhammadu Buhari granting financial autonomy to the judiciary arm of government.”

Sambo lamented that contrary to what obtains in the executive and legislative arms of government in respect of financial autonomy, the judiciary had not been enjoying that same autonomy.

He hoped that Governor Abdulrahman Abdulrazaq of Kwara State would comply with the directive of the president to ensure financial autonomy for the judiciary.

When DAILY POST Correspondent visited the Ilorin high court premises at about 9a.m on Tuesday, the gates were under lock and key.

Litigants, lawyers and police personnel were seen outside the court premises in groups discussing the issue of the moment.

Mostly affected were some persons expected to have their bail issues determined and processed.

Reacting to the development, a legal practitioner, Barrister Afolabi Gambari, described the strike by the union as a waste of time and misplaced priority.

According to him, “There can be no good outcome from the strike, no coordination, no consensus, they will be invited and pocketed.”

He said there were similar strikes by the union in the past which never yielded positive results, adding that “he who pays the piper dictates the tune.”

A strike notice dated April 5,2021, pasted on the walls of the court premises read, “In compliance with the national directives regarding our financial autonomy, I hereby direct all judicial staff of Kwara state to comply with the directive that all courts are to shut down activities on 6th day of April, 2021”.

“All staff are advised to remain at home until further directives,” the notice signed jointly by the state chairman, Comrade Ibrahim Sambo and state Assistant Secretary, Ahmed M. Taofik, stated. 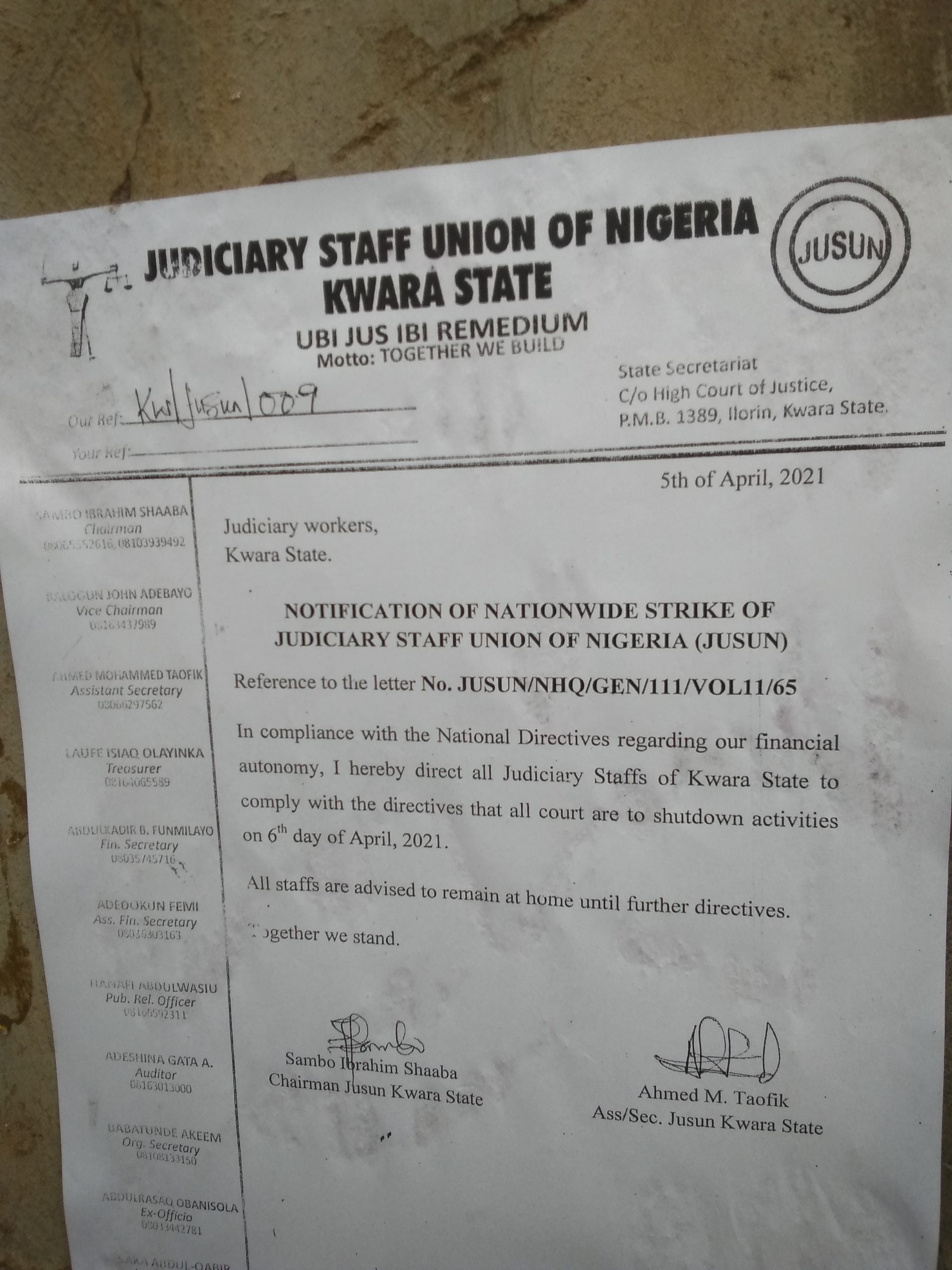