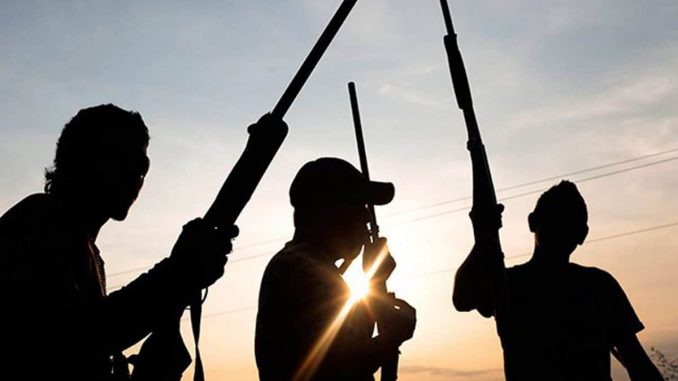 Bandits have abducted students and teachers from UBE Primary School in Rama, a village in Birnin Gwari Local Government Area of Kaduna State.

Daily Trust reports that the incident occurred while pupils were trooping into the school around 9:am on Monday.

A resident Abdulsalam Adam confirmed the attack. He said the gunmen came on about 12 motorcycles.

“I have been told that three teachers and some pupils have been abducted but we are trying to ascertain the true situation. Right now, our vigilante boys and other volunteers have gone after the bandits,” Adam told Daily Trust.

“We are in the school right now, what we are trying to do is comb the bushes because some of the children ran into the bush. So, we don’t know how many were abducted at the moment.”

Another resident Mai Saje Rama said a particular parent whose name is Halilu saw bandits carry his son on a motorcycle.

Rama stated that security operatives have gone after the bandits but they are yet to return.

The latest attack is one of many in the northern part of Nigeria in the last 30 days.

Last week gunmen raided a college in north-west Nigeria and kidnapped 39 students, in the latest mass abduction targeting a school.

The gang stormed the Federal College of Forestry Mechanisation in Mando, Kaduna state, at about 9.30 pm (2030 GMT) on Thursday, shooting indiscriminately before taking students.

The Kaduna college was said to have about 300 male and female students – mostly aged 17 and older – at the time of the attack.

Kaduna State commissioner for internal security, Samuel Aruwan, said 39 of the students were missing while the army was able to rescue 180 people after a battle with the gunmen.

Aruwan disclosed that “further checks in the wake of the attack by armed bandits … indicate that 39 students are currently unaccounted for,” including 23 females and 16 males.”

Prior to the attack on the school, about 279 students were kidnapped from their boarding school in Government Girls secondary school, Jangebe, Zamfara State in late February.

Zamfara State governor Bello Matawalle Tuesday, March 2 announced the release of the girls to the government.

Before Zamfara State, bandits also abducted about 42 people in Government Science secondary school in the Kagara district of Niger state at around 2:00 am local time, overwhelming the school’s security detail.

The abductees – 27 students, three staff and 12 members of their families were later released after days in hostage, the Governor Abubakar Sani Bello said.