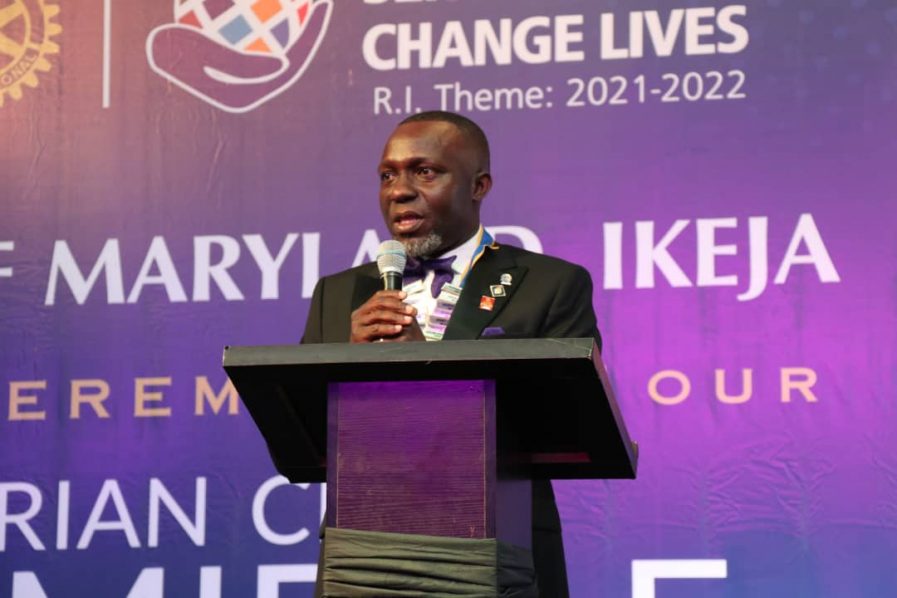 Rotarian Bamidele Onalaja was installed as its 20th President.

The Rotary Club of Maryland, Ikeja ushered in a new era as Rotarian Bamidele Onalaja was installed as its 20th President.

Onalaja, who is a property magnate and the Chief Executive of RevolutionPlus Group, pledged ‘to do good in the world’ as Rotary dictates and to serve the club as well as humanity with pride from July 1, 2021, when he assumed office, till June 30, 2022, when leadership would change hands.

Bamidele who spoke on at his installation, called for massive support from members of the club and Rotary
District 9110 Nigeria to achieve their set goals and objectives for the 2021/2022 Rotary Year.

He also disclosed that the club had kicked off with some landmark projects; such as the N70m Child and
Maternity Health Centre at Amuwo-Odofin, 6 blocks of classrooms with an assembly hall and offices at Wasimi Junior School, Mende Maryland, which is valued at N10m and the commissioned ultra-modern toilet facility built at a cost of N4.2m at the Cane Village Craft Centre, Odo
Iya Alaro, Maryland.

In his remarks, the royal father of the day and Ooni of Ife, His Imperial Majesty, Adeyeye Enitan Ogunwusi, congratulated the club for having Rotarian Onalaja as its president and urge the entire membership to rally around the newly installed executive to surpass expectations.

Bamidele, a philanthropist, is the founder of the Chris Bamidele Onalaja Foundation (CBOF) whose core values are education and scholarship grants, economic and community development, widows’ empowerment and water sanitation and hygiene as well as disease, prevention and control.

Through CBOF and support of his wife, Mrs. Tolulope Onalaja, Bamidele launched a N10 million initiative to empower over 500 widows.