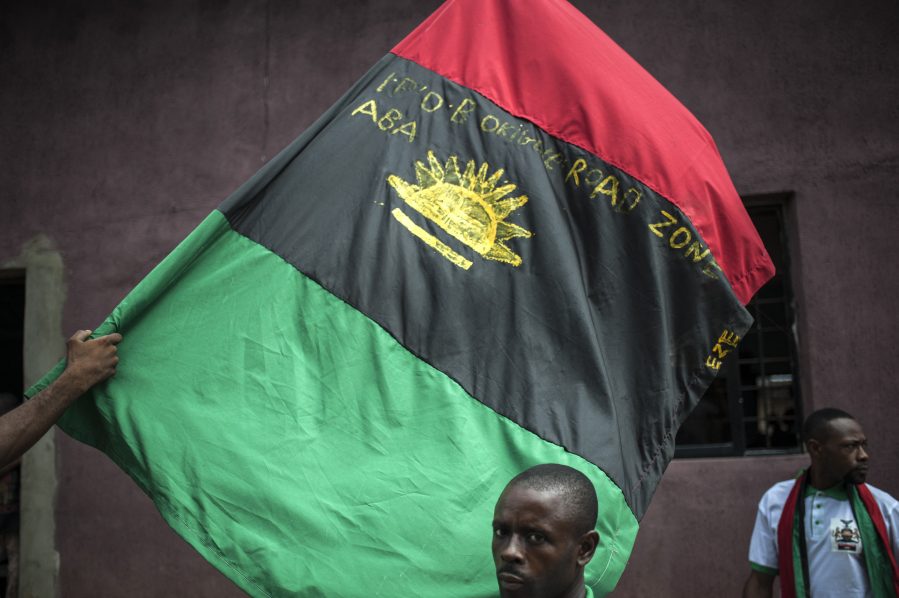 (FILES) In this file photo taken on May 28, 2017 Supporters of the Indigenous People of Biafra (IPOB) wave the Biafra flag in the Osusu district of Aba. – In a region where separatist sentiments often flare up among the indigenous Igbo, officials are pointing at the outlawed Indigenous People of Biafra or IPOB that agitates for a separate state.<br />But the situation is far from clear.<br />IPOB says it is falsely accused in a bid to divide the separatists who are already split over strategy. Some southern leaders accuse rivals of sponsoring attacks to discredit them. (Photo by STEFAN HEUNIS / AFP)

The planned sit-at-home order declared for Monday, August 9, 2021, by the Indigenous People of Biafra (IPOB) has been suspended indefinitely.

According to the announcement credited to one Kanunta Kanu, who is said to be the IPOB leader’s younger brother, the suspension was due to the National Examination Council (NECO) examination for junior secondary schools, scheduled to hold same Monday.

The IPOB said that a new date for the commencement of the sit-at-home order would be announced later.

The group stated that its suspension of the order followed pleas by well-meaning individuals and groups within and outside Biafra land that the order is suspended to allow students from Igboland to participate in the NECO examinations.

IN Enugu, although the police have maintained sealed lips on whether the residents should ignore the order and go about their legitimate duties, members of the group have, however, braced up to ensure full compliance to the directive.

Powerful in another statement, yesterday, insisted that the “sit-at-home” order was ‘sacrosanct.”

He said: “There will be no movement throughout Biafra land on Monday until our leader who is suffering for our freedom is released. This protest is peaceful but firm. Everybody is advised to stay indoors in total compliance.”

MEANWHILE, Imo State Commissioner of Police (CP), Abutu Yaro, has urged all residents of the 27 local councils of the state to ignore the sit-at-home order issued by IPOB in the five states of the South-east geo-political zone.

This was contained in a statement issued by the command, and signed by the Police Public Relations Officer (PPRO), Michael Abattam, and made available to The Guardian, yesterday.

The CP advised the people of the state to be bold and resist any enforcement to adhere to such order.

HOWEVER, the Enugu State Government, while reacting to the sit-at-home order, through the Capital Territory Development Authority (ECTDA), said there was no constituted authority, either as federal, state, or local government that declared any Monday as a resting or work-free day.

A statement by ECTDA Executive Chairman, Denge Josef Umunnakwe Onoh, said: “ECTDA wishes to clarify that the authority also wishes to assure residents in the three local councils of the state capital that there will be no molestation of anybody conducting genuine business in the state except such a person is a miscreant in which case the law enforcement agents have been put on notice to deal with such nuisances.

“We, therefore, ask all business operators within the capital territory to ignore the propaganda of a sit-at-home order as the state government has put machinery in place to ensure that lives and property are secured.

In another development, a group, under the umbrella of Drivers Welfare Association (DWA) in Anambra State, has kicked against the proposed sit-at-home order, saying that it is not in the best interest of the people of Southeast.

Patron of the association, Pastor Obinna Anisiobi, who disclosed this to newsmen, yesterday, in Onitsha, said such an exercise if carried out, would be futile and counter-productive.

He, however, said that though the drivers usually support any move aimed at fighting marginalisation of the Southeast zone and Ndigbo in particular, the urge to issue certain orders has become alarming and would not work out in some cases.