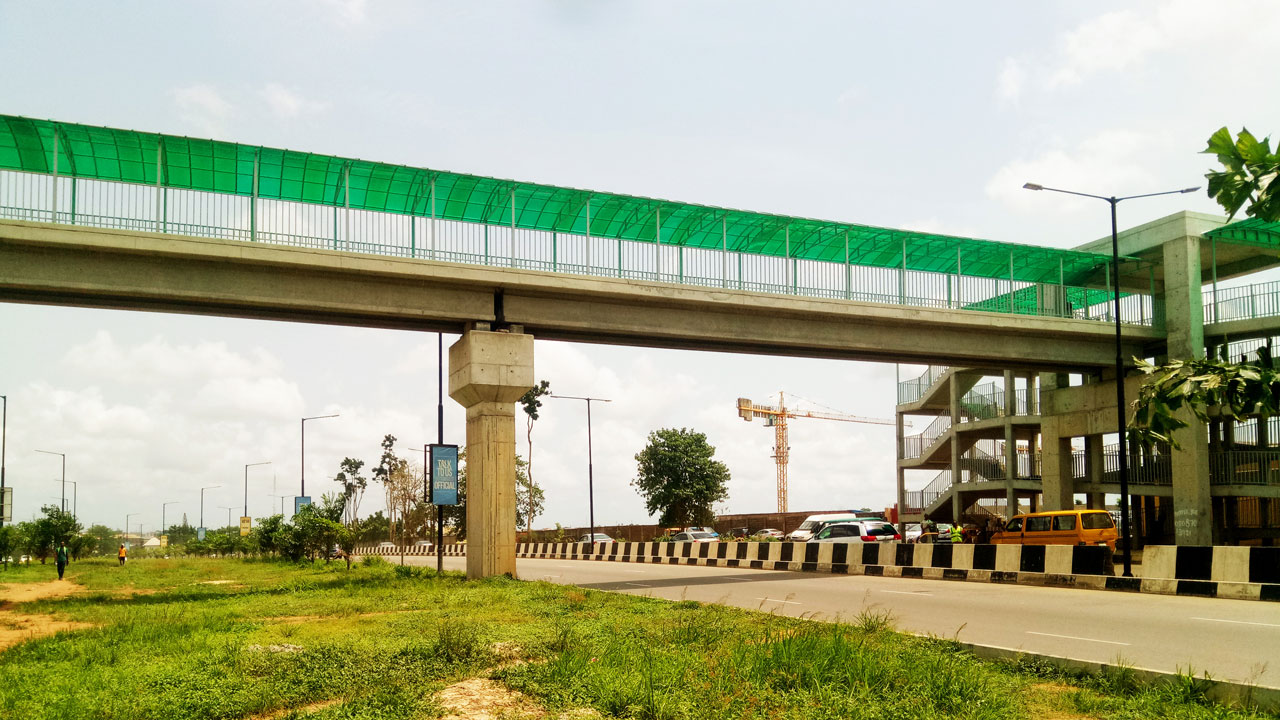 Road had claimed many lives
Two years after President Muhammadu Buhari commissioned the airport road, two of the pedestrian bridges on the expressway are near completion.

The airport road was constructed by the former Governor Akinwunmi Ambode administration.

This is coming after five publications by The Guardian calling for its completion. Absence of the bridge on the airport road in NAHCO and 7&8 Bus Stops had led to the death of over one dozen pedestrians.

According to road users in the area, within the last two years, over 20 pedestrians have died from road accidents with children constituting 10 per cent of the victims.

One of the pedestrian bridges, located between Airport Junction and 7/8 Bus Stops, is the link between the Mafoluku and Ajao Estate. The only bridge students and residents from both communities use whenever they transit to either side, but the bridge was abandoned by contractors, resulting in students and residents crossing the ever-busy expressway.

A trader, Muibat Ajibola, said: “They did not complete the bridge, which they are supposed to do. The children cross the road themselves. Accidents have claimed lives of many little children. I witnessed more than two or three accidents within a week. They have taken too long on the bridge. Last month, a child who wanted to buy sachet water was hit by a vehicle. As the child crossed the first lane, while crossing the second lane, the child was hit by a vehicle, which led to her death immediately.”

A resident, Andrew Onwuzurike, revealed that he had witnessed about three accidents.

“Personally, I have witnessed about three accidents. The first one, somebody was crossing ahead of me and he was knocked down, an old man which I am sure had a family at home waiting for him to return. The second person was a man who was into real estate. I heard he was knocked down on that same road by a vehicle that was driving against traffic and a week after, I saw his obituary.

“Another happened on a day I came into Lagos from Edo State. I alighted at Airport Junction. Immediately, I crossed the road, and someone who was also trying to cross behind me was knocked down by a vehicle. I was among those who assisted to take him off the road because he was unconscious and bleeding.”

While reacting on the location of the bridge, the people faulted the contractors for citing the bridges at places where they would not benefit users.

“The one that was there formerly was removed; the new one that they are completing now is not at the location that is frequently accessed by road users. It is supposed to be where people use often. In fact, where it is now, people don’t usually go through that place. There are two points around the airport road where people usually cross, which is the one directly between Zenith Bank and Joygate,” he said.

A trader in the area, Mama Rita, said: “The bridge is in the middle. It is far from the bus stops where people can easily use it. But it is a good thing that work is almost done on it because it will reduce the number of accidents that occur on this road.

A student, Iyinola Philip, stated that since the bridge was abandoned, crossing the road had been part of them, boasting he would not use the bridge after completion because of the distance.

NAPTIP hands over 5 trafficked children to their parents, arraigns suspect in court

NAPTIP hands over 5 trafficked children to their parents, arraigns suspect in court