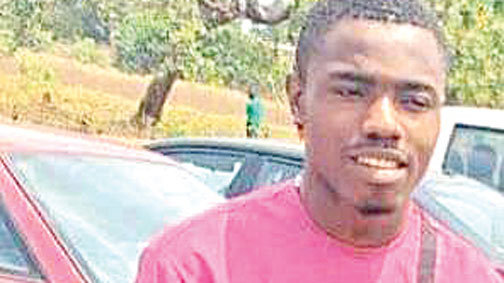 A 400-level optometry student of Abia State University, Uturu, has been confirmed dead after jumping down from a three-storey building.

He was reported to be on drugs when he jumped from his lodge called Favour Lodge located off the campus on Saturday evening.

Reports by students revealed that the deceased, identified as Francis Chibuike, in the video recorded after he took a hard drug known as Colorado, was unable to contain its effect.

According to some students, his friends reportedly locked him in the room and went in search of cassava flakes known as garri to restore him back to consciousness, but the deceased went through the balcony and jumped down from the building with blood gushing out from his head before they returned.

A student from the school, Paul Udo, in his Facebook post, said the deceased jumped from the stairs with head shattered beyond medical help.

Another student, Nnadi Thyword, while commenting on the incident, said: “Come to think of it; he is a medical student and ought not to be told the dangers of these drugs. It is doubtful to say that those who take these drugs don’t know the negative effects. This is simply an addiction.”

In the video made available to The Guardian yesterday, the student recording the video, who appeared to own the apartment, where Francis had taken the substance, was heard saying: “I told you not to take it, but you did. I told you I don’t like it. ”

According to a news publication, the Chief Security Officer (CSO) of the institution, Navy Commander ThankGod Evulobi (retired), confirmed the incident, describing it as one of the consequences of hard drugs.

According to him, the deceased, who is from Imo State, drugged himself and told his friends that he was going out only for him to jump out from the window.