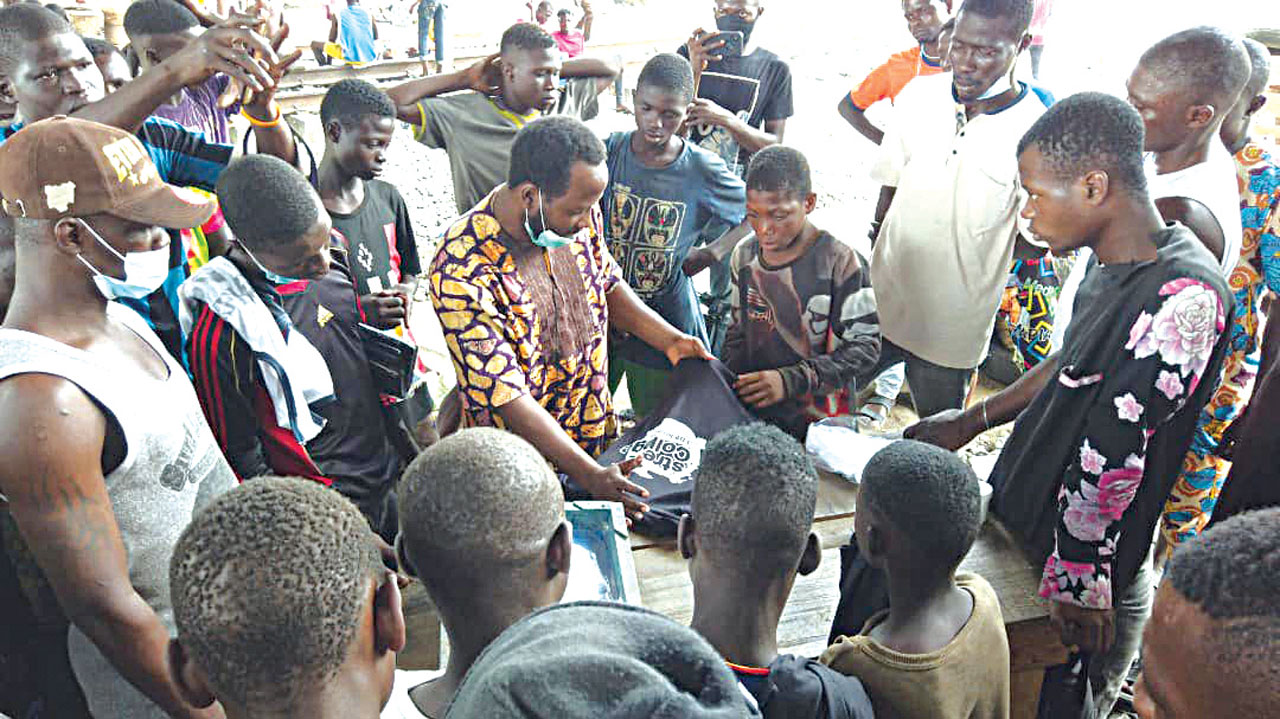 “Berger, Tollgate! Berger, Berger! This one don full, enter next one, enter, enter…” an amputee teenage boy wades through the busy Oshodi motor park that hot Sunday afternoon, signaling hurrying commuters into a yellow commercial bus popularly called Danfo. For him, it was just another busy day.

However, not very far from him, it was the most unique experience for the over 60 youths crouched gingerly underneath the Oshodi Bridge engaged in a practical art class. They were freely taught how to screen-print fancy patterns on t-shirts. For them, the magic was beyond receiving free shirts or learning to make them; it was the entire experience that became their perfect Valentine’s Day gift.

“You would find a lot of youths on the street in a time where there are fewer role models. I am trying to use art as a tool for social change – to lure them away from violence,” Sobayo Abolore solemnly notes.

For the art-educator, philanthropist and organiser of the Valentine Street School outreach, this is more than just a street-side masterclass; it was a step to achieving his goal of reducing the number of youth street urchins in the popular Lagos suburb.

“Some of these youths are on the streets because they are abused from home, or because of peer pressure. Some of them are from broken homes or they are orphans. Whether we like it or not, these guys could metamorphose into a lot of things, depending on how we shape them. If they take up arms and ammunition, they become terror, but if we give them tools to express their creativity, then they become creative people who can contribute positively to the community.”

Abolore, draped in a loose Ankara shirt, is circled by an enthusiastic crowd of half-nude teenage boys – aged between 9 and 20 years – who watch keenly as he demonstrates using sample t-shirts and local tools. From the over 60 people gathered, only 20 students participate fully in the practical due to limited resources.

Afterwards, each of the boys takes turns, using Abolore’s mesh tool, which serves as a template, to paste a beautiful pattern on a t-shirt. At the end of the lesson, the boys were beaming with smiles, and that was the climax itself.

“Some of these youths also ask me to take them with me when I am going,” he notes. “But I cannot do it. Sadly, I don’t have the funds to take everyone under me. I tried it seven years ago, and I had to close it down because I couldn’t afford it.”

Now, Abolore takes respite in the “little” he is giving them. The youths are not just taught an art-skill; their data is also harvested for a time when he believes his Sobayo Abolore Foundation would be able to completely whisk them off the streets.

“For now, we are teaching an art skill and you create what you can wear; we provide food and drinks. We are trying to take them through a process of counselling, detoxification and re-integration into the society, by getting some of them started off in one artistic trade or the other.”

Abolore’s sojourn into philanthropy was birthed from his childhood experiences, witnessing a myriad of largely indigent youths trapped in a cycle of misfortune, while struggling to survive in that community. His pains later stretched beyond financial fulfillment, as the artist had to abandon his short-lived political career, after serving a term as a Councilor in the same community.

“I was born in Oshodi, into a family of 10 kids; I am eight in position. While growing up, I was exposed to seeing a lot of violence on the streets; it inspired me to want to do something better. When I tell people that I am from Oshodi, they have a negative profile about me; I wanted to change that.

“I realised that you don’t need to be rich to give. In fact, I believe that to be rich, you need to give. I am not as rich as Tony Elumelu; I am a mid-career artist that is just trying to survive, but the reality is that if I have a little and I can give a little fragment out of what I have, it can go a long way in making a difference. All you need to do is be the agent of change. Basically, this is why we started the outreaches.”

He continued: “I was once into politics in that same community, but the issue with politics were the limitations. As a politician, there were things I couldn’t do because people would think I was doing them to get re-elected into office. So, once I left office, I just faced my foundation and now I am free to do what I need to do. All you need to do is be the agent of change. Basically, this is why we started the outreaches.

However, Abolore notes that it remains an arduous task funding these outreaches. For him, “The joy we see on the faces of these youths, gives me the drive to do more. Some of the little acts I might do might change their lives for a better turn and that makes me want to do more.”

Abolore notes that the street school, which started in December 2020, would not be limited to Oshodi residents alone.

“We started last year and we taught over 36 full-participants how to make tie-dye shirts. We would take it out of Oshodi. We want to start by creating an impact where we are, firstly. We are still moving on,” he assured.

And so the story goes, progressively, for Abolore, who hopes that his actions would become the proverbial drops of water to quench an inferno of social ills plaguing a lot of young people in the country.