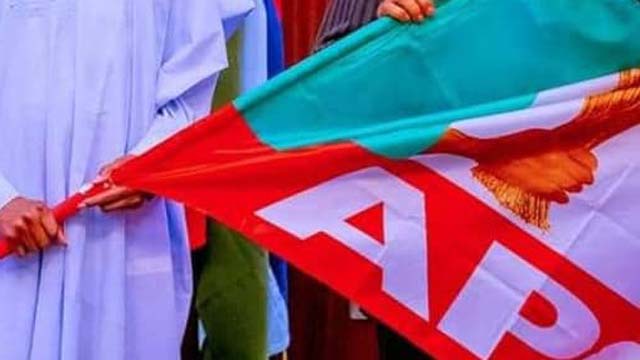 The News Agency of Nigeria (NAN) reports that the party has been rocked by a leadership crisis, leading to the emergence of two factions.

Consequently, both factions organised parallel congresses at the ward, local government, and state levels, which resulted in two rival leaderships.

The group loyal to Nwankpa, comprising the new ward, local government, and state executive members, converged on the party Secretariat on Azikiwe Road, Umuahia for the handover ceremony.

NAN recalls that the group loyal to a chieftain of the party, Chief Ikechi Emenike, also produced its ward, local government, and state executives, with a retired banker, Dr Kingsley Ononogbu, as the state Chairman.

The national leadership of the party on Feb. 4 issued a Certificate of Return to Ononogbu at a ceremony in Abuja.

Speaking at the handover, Nwankpa said, “today marks a new beginning,” adding that his era, since 2013, when he emerged as the state Chairman, had successfully come to an end.

Nwankpa, who has led the party executive under the merger, elected and caretaker committee arrangements, expressed joy that he “took Abia APC from obscurity to prominence”.

He recalled that under his leadership, the party won seats at the state assembly, House of Representatives and also won the presidential election in Abia.

“We came second in the governorship election,” he said.

He said he had the confidence that Obioma would consummate the party’s victory in the state by winning the governorship in 2023.

He also commended former governorship candidates of the party, Chief Anyim Nyerere and Uche Ogah, amongst others.

He said they all provided necessary support to the party at critical moments.

Nwankpa described the choice of Obioma, a former House of Representatives member for Ikwuano/Umuahia Federal Constituency, as “a reward for consistency, loyalty, passion, and commitment to the party.

“His accepting to lead the party is a demonstration of humility,” he said, adding that he would enjoy the full support of the chieftains of the party.

He also admonished the party leaderships at all levels to be ready and determined to defend their elections at all times.

In a speech, Obioma commended Nwankpa for providing dynamic leadership and being able to take the party “from nothing to greatness” in the state.

He said: “This is our party, we brought it and built it in the state.

“We are all witnesses to when it was nothing to this moment it has become a formidable force in the state.

“About 99 per cent of APC chieftains in the state are solidly behind this executive.”
Obioma further said that the leadership would continue to hold meetings to strategise to attend the upcoming party national convention in Abuja.

According to him, no other group of delegates will represent Abia outside these party leaders.

He promised to initiate measures to strengthen the party at the ward and local government levels.

He gave assurance that his leadership would give every state officer the latitude to function optimally, adding that he would carry every party member along.

In a brief interview with newsmen at the end of the event, the party’s Publicity Secretary, Mr Mike Ozoemena, said the ceremony was the traditional handover of the baton of leadership from the old to the new executive.

Ozoemena said that there was no faction in the party and that they were open to any move to bring back the estranged members.