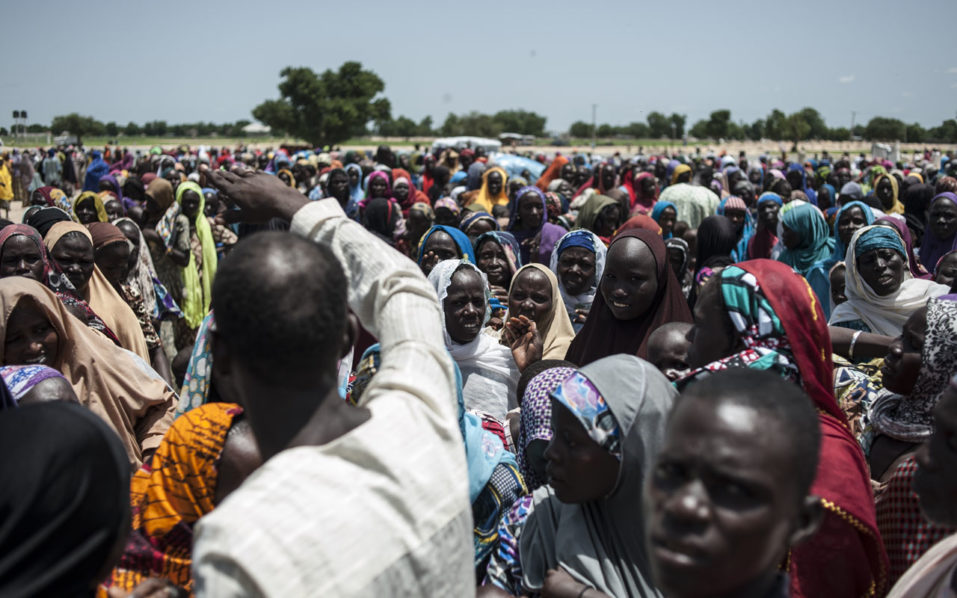 [FILES] In this photo taken on September 15, 2016 women and children queue to enter one of the Unicef nutrition clinics at the Muna makeshift camp which houses more than 16,000 IDPs (internally displaced people) on the outskirts of Maiduguri, Borno State, northeastern Nigeria.<br />Aid agencies have long warned about the risk of food shortages in northeast Nigeria because of the conflict, which has killed at least 20,000 since 2009 and left more than 2.6 million homeless. In July, the United Nations said nearly 250,000 children under five could suffer from severe acute malnutrition this year in Borno state alone and one in five — some 50,000 — could die. / AFP PHOTO / STEFAN HEUNIS

The International Organisation for Migration (IOM), at the weekend, said insecurity had caused 7,053 births across 18 Internally Displaced Person (IDP) camps in Borno State.

Its Chief of Mission in Nigeria, Fraz Celestine, told reporters in Abuja that no fewer than 12 million people had been displaced in the entire North East region besides some 4.4 million others that are at risk of hunger.

The United Nations agency noted that more persons were migrating due to insecurity, the impact of COVI-19 pandemic, climate change and natural disasters.

“We carry out stability index to see if those displaced can be able to return to their communities of origin, while we provide them with some basic amenities like water, health care, schools and water. This is in line with our work of preparedness, response, transition and recovery,” he said.

Celestine added: “Our records have shown that 7,053 babies have been born in 18 of these IDP shelters in Borno State alone and this is unfortunate as many of them are born with no health facility.”

He linked internal migration to hardship, conflicts and natural disasters, stressing the need for people to migrate externally in a proper way to reduce exposure to abuse and violation of basic human rights, and in extreme cases, death.

The global body said it has been generating data on migration to assist state and non-state actors in making necessary interventions, especially in the areas of food and medical supplies to refugees.