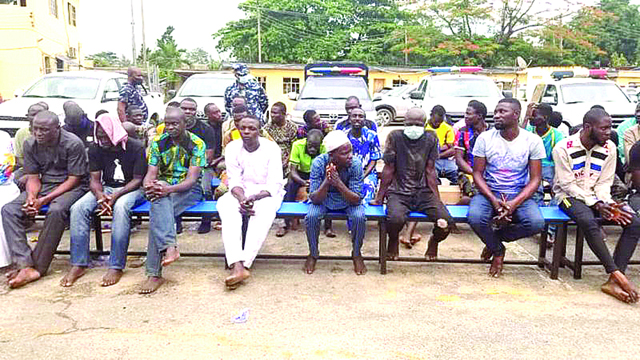 Forty-Seven out of the 48 Yoruba Nation agitators arrested by the police during the July 3 rally in Ojota, Lagos, have regained their freedom from custody.

The Guardian learned yesterday they were released on Tuesday after meeting bail conditions.

A spokesperson for Ilana Omo Oodua, a Yoruba self-determination group, Maxwell Adeleye, confirmed this development in a statement.

He said: “This is to inform the general public that 47 out of the 48 protesters arrested by the Nigeria Police during the Yoruba Nation rally held July 3rd, 2021 have been released from detention after meeting their bail conditions.”

However, Tajudeen Bakare, who was charged with the murder of Jumoke Oyeleke, a 25-year-old trader, who was hit by a stray bullet when the police were dispersing the agitators during the rally, is still in detention.

The police said Bakare was in possession of a Beretta pistol, two live ammunition, and “unlawfully killed” the trader.

He was detained following a remand order by the magistrate as a result of a murder charge preferred against him by the police.

The police, on July 19, filed a five-count charge against the agitators at a magistrates’ court in Yaba, Lagos.

The charge bothers on murder, unlawful assembly, unlawful society, and conduct likely to cause a breach of public peace.

PDP moves to dump Uba for Ozigbo, denies use of new structure