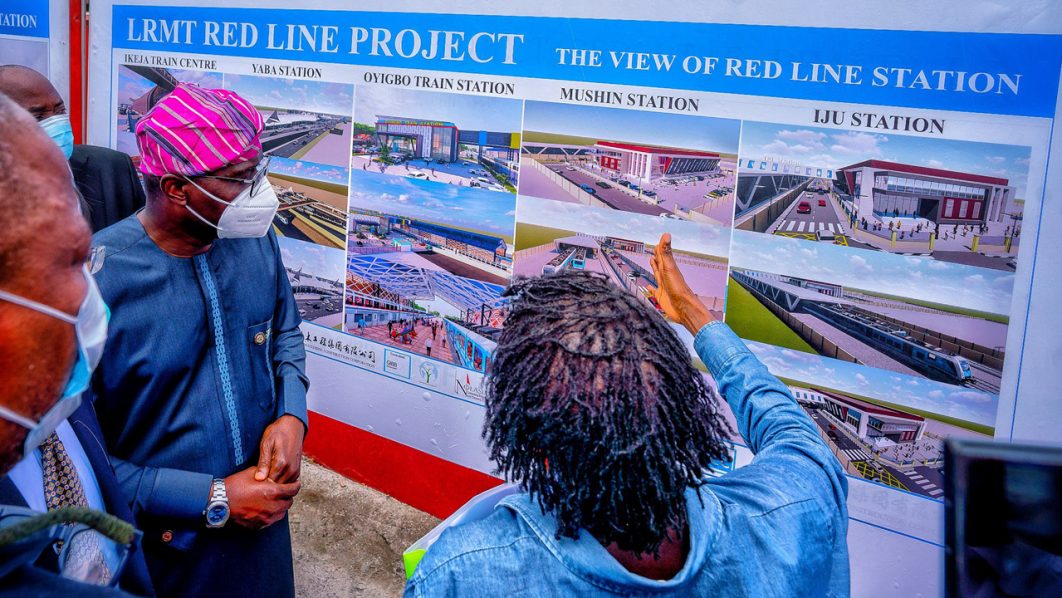 Metro line will be completed in 24 months and will share the FG’s Lagos-Ibadan track up to Ebute Metta. It will run on its dedicated track from there to Oyingbo and reduce travel time from 2.5 hours to 35 minutes. The Red Line project is to raise mass transportation capacity. Photo: TWITTER/JIDESANWOOLU

Ten years after it ought to have delivered the Blue Line Rail project, the Lagos State Government, yesterday, performed the ground-breaking of the red rail line.

The project is a replica of the late Alhaji Lateef Jakande’s metro line conceived 35 years ago.

Though Governor Bababjide Sanwo-Olu did not provide reasons for the delay in delivery of the blue line, he, however, assured that the new project would be delivered in the last quarter of 2022.

He said the construction of infrastructure for the standard gauge that shares tracks with the Lagos-Ibadan Railway Modernisation Projects and whose implementation started yesterday, is divided into two phases.

The governor added: “The Red Line is a 37-kilometre railroad with 12 proposed stations. The first phase will cover Oyingbo to Agbado with nine stations. Three of the stations will be constructed with the Lagos-Ibadan Railway Modernisation Projects by the Federal Government at Agbado, Agege, and Ebute Metta Junction. The remaining six would be constructed as independent stations at Iju, Ikeja, Oshodi, Mushin, Yaba, and Oyingbo. The phase two, which would be mostly elevated, would have stations at Iddo and Ebute-Ero before terminating at Marina where a huge interchange is planned to manage commuters on the Red, Green, and Blue rail lines’ BRT buses and those using the waterways.”

Sanwo-Olu said his administration was committed to renewing infrastructure, building new ones, and improving facilities for an efficient and integrated transportation system.

He went on: “This plan is founded on a number of imperatives which includes increasing transport choices for all users, making the transit system integrated, attractive, convenient, affordable and accessible, as well as reducing urban transportation-induced emissions, optimising usage of the current road network, integrating land use development (urban physical planning) and urban transport planning and securing long-term financing of the investment plan.

“Our choices for an integrated transportation system are very clear. We would continue to search for every available means of funding for our transport infrastructure to ensure that by 2022, we would have two rail lines operational and initiate the construction of another two more lines in partnership with the private sector.”